Almost sixty million dollars, allocated in the 2019 Budget, will be invested in green, innovative and sustainable, income-generating projects in the hinterland. These projects will create jobs and create income for residents in several villages including Paruima in Region Seven, Santa Cruz and Tobago Hill in Region One and Maruwanau and Bina Hill in Region Nine. 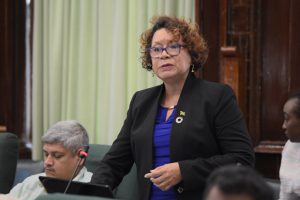 Minister within the Ministry of Indigenous Peoples Affairs, Valerie Garrido-Lowe.

This was according to Minister within the Ministry of Indigenous Peoples Affairs, during her defence of Budget 2019 in the National Assembly today. She said that the Indigenous peoples have been equitably represented in the Budget.

“Since this Government took office, the Ministry of Indigenous Peoples’ Affairs has been focusing on building the capacity of our Indigenous and hinterland people. Your Government, Mr. Speaker, does not believe in handouts. We believe in empowering people and giving them the economic support required so that they can create successful and meaningful lives for themselves.”

The sum of $3Million has also been allocated to support the Lapidary project in Region Eight. These funds will be used to purchase the jewel boxes and bags crafted by the Indigenous people themselves, as well ensure the provision of internet connectivity.

In the area of youth development, Minister Garrido-Lowe explained that the Hinterland Employment and Youth Service (HEYS), has provided one year of training to 3,795 youths in 222 villages over the last two years.  Some 2,054 small businesses were established by these youths in villages as far as Kakshibai, Tipiru and Achiwib in Region Nine, and Monkey Mountain and Red Creek in Region Eight.

To date, Government has invested $2.3Billion for the development of hinterland youths and in the 2019 Budget, a further $176.1Million has been allocated for monitoring and mentoring, along with additional monetary support for the hinterland youths.

A total of $4Million will also be spent on the construction of two rest-shelters for the students of Chenapau and Karisparu in Region Eight, who have to walk long distances to attend Secondary School in Paramakatoi. These shelters, Minister Garrido-Lowe explained will provide a respite for the students and their parents, while the Government will review the building of proper roads and bridges so vehicles will be able to traverse these areas.

Further, to ensure that Indigenous residents can transact business with ease when in the capital city, the sum of $28Million was apportioned to furnish an extension at the Indigenous Residence Princes Street, Georgetown.

According to Minister Garrido-Lowe, “These projects will directly impact the poor and the vulnerable by creating employment and generating income in these communities, thus raising the standard of living and providing the opportunity for our Indigenous brothers and sisters to live a good life…, this is no handout. This is your Government investing in the ordinary people, building their capacity and providing the economic.”