During a press conference today at the Attorney General’s Chambers, Attorney General (AG) Hon. Basil Williams explained that the conference, which will be held from July 13-15, 2016, will see the attendance of Attorneys General and Judges from CARICOM countries, the wider Caribbean including Curaçao, Aruba, Turks and Caicos and the Cayman Islands and South American countries such as Brazil and Argentina. Local stakeholders include members of the local judiciary, the Child Care Protection Agency, the Bar Associations, the Guyana Association of Women Lawyers, non-governmental organisations relating to children and the Private Sector Commission.

The Conference will be opened by H.E. President Brigadier David Granger at the Opening Ceremony slated for July 13 at the Pegasus Hotel and will be attended by the Secretary General of the HCCH and the UNICEF Regional Director for Latin America and the Caribbean. 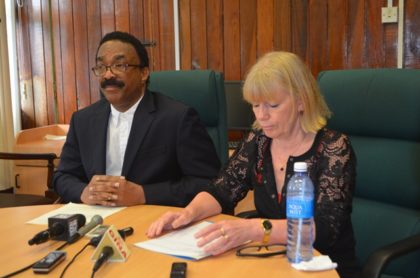 As regards the purpose of the Conference, UNICEF Representative for Guyana-Ms. Marianne Flach, explained that the expected results of the conference are as follows:

3. Determination of an appointment of local (Guyana/Caribbean) judges to the Hague Judicial Network and

4. Development of a road map for ratification of the Conventions.

Ms. Flach further explained the importance of the conference in light of migration and abduction in the form of adoption; issues which affect children worldwide. Many unaccompanied children migrate from Syria to Europe and many children from Guyana, Suriname, Haiti and Mexico are abducted in the form of adoptions. There is a need for laws in place to protect these children and this conference shows a proactive effort to put the legal systems is in place.