$97M in contracts awarded under CIIP-contractors urged to employ locals

The Ministry of Communities has signed seven contracts, totaling $97M for the execution of projects under the Community Infrastructure Improvement Programme (CIIP).  CIIP is one of Government’s projects aimed at transforming communities through the improvement of aesthetics, access and creation of jobs at the grass root level.

The contracts were signed this afternoon between Permanent Secretary (PS), Ministry of Communities, Emile Mc Garrel and contractors in the Ministry’s boardroom in Kingston. Witnessing the signing was Minister of Communities Ronald Bulkan.

The contracts signed are: –

The projects are estimated to be complete in three months. There is a six-month duration retention.

PS, Mc Garrel, in handing over the contracts, urged the contractors to employ the local resources within the communities when executing the works. 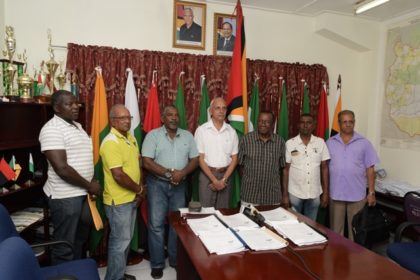 Minister of Communities Ronald Bulkan with the contractors.

He noted that though the ministry does not have the power to control the contractors’ employment process, he hopes that they will heed his advice since it will be beneficial for the community. “While it is not in my position to tell you who you should employ, it is our (Ministry of Communities) expectation that you bring some opportunities for local employment in the areas in which you execute those projects……. the communities must benefit not only from the product but the communities must benefit from the process,” McGarell said.

The Permanent Secretary also urged the contractors to complete their projects effective and efficiently within a timely fashion so that the residents within the communities can use facilitates before the year-end. He stressed that the Ministry’s Senior Special Project Officer, Naeem Khan will be overseeing the projects.

CIIP began in 2014 with a focus of improving the aesthetics of, and preserving and maintaining community infrastructure within Neighbourhood Democratic Councils (NDC) and townships.

The project which is currently run under the Ministry of Communities saw workers, in nine Regions; with Region Eight 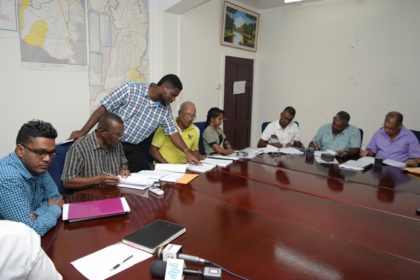 being the exception, involved in cleaning their surroundings and maintaining community drainage. It also had an infrastructure development component, where the focus was on the construction of bridges, culverts, roads, playgrounds, parks and markets. These projects were facilitated are per requests from the communities, through the NDCs or in some cases, the Regional Democratic Councils (RDCs).

The projects that get CIIP’s approval are those that contribute towards the social and economic development of the community, as well as create employment.