ACS, OAS to help Venezuela through open and inclusive dialogue

Heads of Government and the State of the Association of Caribbean States (ACS) at a recent Summit held in Cuba, embraced an Organisation of American States (OAS) declaration on Venezuela.

At this Summit, Guyana was represented by President David Granger and Minister of Foreign Affairs Carl Greenidge. 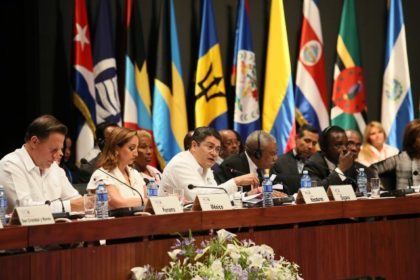 Upon his arrival, His Excellency President David Granger reiterated his call for a peaceful co-existence of states within the region. “The Caribbean is a very important part of the western hemisphere lying between the continent of North and South America, and it is in our interest that as Caribbean States we should meet from time to time to ensure that Caribbean remains a zone of peace”, he explained.

The OAS Declaration of the Permanent Council declares a commitment by its members to assist the search for solutions for Venezuela through open and inclusive dialogue among its government, constitutional authorities and all political and social players.  Additionally, the declaration will support dialogue in order to find alternatives to promote political stability, social development and economic recovery.

Minister Greenidge in a recent GINA exclusive indicated that there was controversy over the position of Venezuela and how best the ACS group can lend support in light of the economic difficulties they are facing. “In the end the group…not withstanding some polarized differences of views…the meeting agreed to embrace for the most part, the terminology and terms of the OAS Declaration” Minister Greenidge said.

The recent move by the Permanent Council of the Organisation of American States, came after considering that its Charter promotes democracy as essential for stability, peace and development in the region. Further, taking into consideration the current internal situation in Venezuela such a move was necessary.

While Guyana supports the positions of these groups, it continues to press the international community for a judicial resolution of the border controversy with Venezuela.

Recently Venezuelan soldiers opened fire on GGMC officials whilst on Guyana’s side of the border. The Venezuelan government subsequently issued a statement stating that their soldier. An official complaint was lodged to the international community and Guyana is currently awaiting a response on the matter.