Attorney General and Minister of Legal Affairs, Basil Williams today, handed over a copy of the Commission of Inquiry Report into the death of Dr. Walter Rodney to Speaker of the National Assembly, Dr. Barton Scotland. 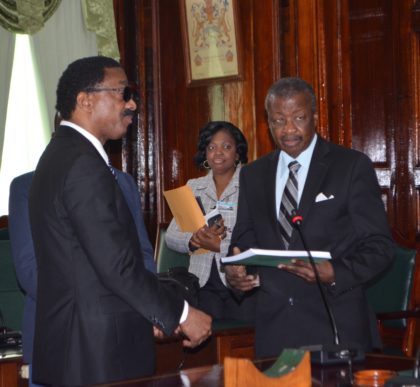 Attorney General and Minister of Legal Affairs Basil Williams hands over a copy of the COI report to Speaker of the National Assembly Dr. Barton Scotland.

The AG stated that, “upon receiving the report from the commissioners, the President set in train a process which was more or less a road map which would have eventuated with the report being laid in the Parliament, and that process involved disseminating copies of the report to Mrs. Rodney, the Leader of the Opposition, members of the Coalition and other interested parties…therefore we have no difficulty in laying over this report at this point.”

Speaker of the National Assembly, Dr. Barton Scotland in accepting the report, stated that it will be laid in Parliament through the normal course of the proceedings in the House.

The report which was first presented to the APNU/AFC Government in February 2016 is a compilation of the findings of a Commission of Inquiry (COI) that was established by former President Donald Ramotar to probe the circumstances surrounding the death of historian, Dr. Walter Rodney.

The report was completed following close to two years of public hearings, and after two extensions were granted by President David Granger.