Food safety, the control of diseases transmitted from animals to humans, antimicrobial resistance and other, and other “One Health” issues related to public and veterinary health were at the top of the agenda, discussed by leaders of the Region of the Americas today in Asuncion, Paraguay.

He added that “One Health”- despite not a few feature, remains a main pillar in addressing Animal and Human health issues though food contamination.

“While it is important to address sustainable development goals, this conference comes at an opportune time when world leaders continue to look at mechanisms aimed at integrating efforts on health and agriculture to eliminate the spread and risk of zoonotic diseases,” he said. 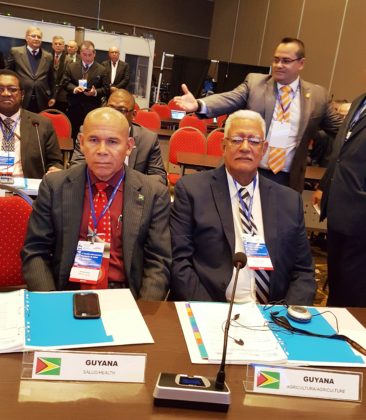 The nexus between animal health and public health, in its diverse eco-systems, is fully expressed in the concept of One Health, which emphasizes the need for good governance among all sectors and actors involved, by preventing and mitigating the risks generated at the interface between people, animals and the environment.

“The “One Health and Sustainable Development” forum we are here today, must seek to addressing ways in which Agreements can be realized between member state countries to further fight against poverty, and the promotion of socio-economic development opportunities for developing nations,” the Minister added.

Among the issues discussed during a panel discussion of which Minister of Agriculture Hon. Noel Holder, served as the Vice President, were ways in which countries can strengthen policies, programs related to animal-human health interface.

One of the key challenges leaders are faced with is agreeing on recommendation for the formation of a road may which will be used in the prevention and control of zoonotic diseases.

The increase use of pesticides for aerial spraying has been posing as a major constraints in Guyana’s case, which according to the Agriculture Minister, has also paved the way for contamination as the said water from canals are also being used for irrigation purposes.

Another area which took center stage is the advancement of mechanism which will see the total eradication of Food and Mouth Disease (FMD). Participants stressed the need to mobilize resources to support surveillance and control of FMD in countries which have not yet achieved disease-free status.

Meeting of the Hemispheric Committee for the Eradication of Foot-and-Mouth Disease (COHEFA) was established in 1987 by the countries of the Americas to develop strategies, define lines of action and manage resources to achieve the objectives set out in PHEFA, and includes representatives from the public sector and the private sector in the region.

It is expected that at the end of the meeting, guidelines and recommendations for the country’s governance among the health, agriculture and environment sectors for the early warning, detections and risk management will be realized.

The opening session of the Ministerial meeting was addressed by President of the Republic of Paraguay, H.E Horacio Cartes and Minister of Agriculture and Livestock, Paraguay Mr. Juan Carlos Baruja.