With government moving apace to double rice production within the next five years, Agriculture Minister Zulfikar Mustapha said his Ministry will be working to resuscitate rice cultivation at the Santa Fe mega farm in Region Nine.

This was disclosed during a recent two-day outreach to the North Rupununi Region earlier this week.

Minister Mustapha, while visiting the farm, noted that government was able to increase its quota for rice being shipped to Brazil through Guyana’s current bilateral trade pact-Partial Scope Agreement. He added that with Santa Fe being located closer to Brazil, it would be economically viable to resume cultivation there.

“Santa Fe has a rice mill and thousands of acres specifically for rice cultivation. In the past, the farm was able to produce rice which was sold to Brazil. This was done through upland rice cultivation which is a system that our neighbors in Brazil, who on similar soil, has been able to enjoy over 30 years of success in this type of cultivation. I was told that irrigation has been a challenge in the past so we’ll be working closely with the team from Santa Fe to improve their irrigation so that they can resume rice cultivation and agricultural operations at the farm in general. Additionally, my Ministry, through the National Drainage and Irrigation Authority (NDIA), is now working aggressively to improve irrigation for agricultural purposes in the Region. We’ve been constructing several wells and reservoirs to assist with cash crop cultivation and cattle rearing across the Region and this will be a continuous feature by the Ministry,” Minister Mustapha said.

The subject Minister added that apart from rice, the Ministry will also continue to give technical support to the farm to improve its crops and livestock operations. 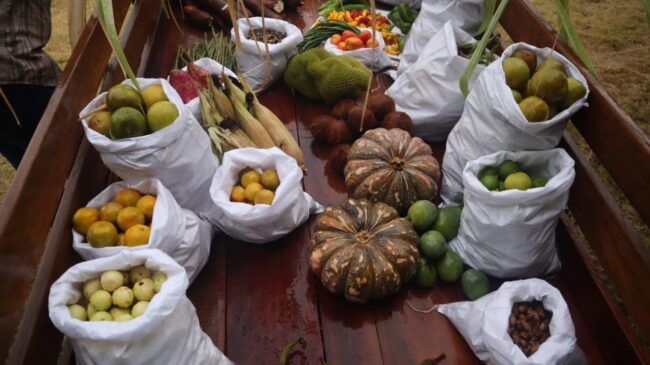 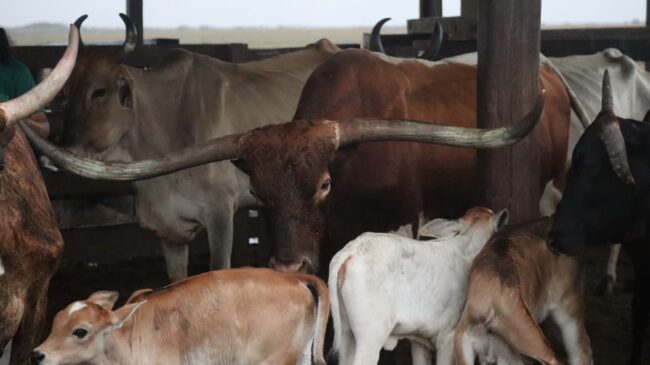 General Manager of the Santa Fe farm, Yolanda Vasconcellos said the farm is currently involved in a wide range of agricultural operations.

“We currently have 29,000 acres of land being utilised for agricultural purposes. We do livestock, crops, and aquaculture. We currently have a variety of orchard crops and other fruits like watermelons, peanuts, cassava, papaw, tomatoes, ochro, and pineapples under cultivation. We also cultivate a number of vegetables and seasonings like eschalot. We also have improved pastures as well as 8,000 acres for rice. We also have a growing cattle herd. So far, we have 460 animals. We’ve imported several breeding bulls like the Texas Long Horn and so on. That is to improve the breeds within the communities here. We’ve also done that with the Arabian horses. They breed with the local animals and have adapted well to the climatic conditions here. We can also process corn so that’s another crop that we propose to get into,” Vasconcellos said

With Guyana spending almost US $25 million annually on feed for the livestock industry, government had announced that special incentives would be given for large-scale cultivation of corn and soya-bean. The budget also saw the removal of value-added tax from agriculture machinery, fertilizers, agrochemicals, and pesticides, making it more feasible for such investments.

Santa Fe was established back in 2010 and currently has 12 full-time employees. However, more villagers are employed when the farm has other projects like planting and harvesting ongoing.

Vasconcellos also said the current global pandemic negatively impacted trade to some extent, especially with Brazil. She also said access to markets before the COVID-19 outbreak has also been difficult at times due to transportation issues during the rainy season.

“Last year we had to scale down on production because of lack of markets because of COVID but that was across the globe. We’ve since been able to resume our regular cultivation but in phases,” Vasconcellos said. Back in 2010, the government signed a memorandum of understanding with ITC Barbados for the development of a large-scale integrated agricultural crops and livestock project. Phase one called for the lease of 100,000 acres of land to the investor with a minimum investment of US$5M.