The push for more youths to join the agricultural sector resonated again yesterday when Minister of Agriculture, Noel Holder made the pitch as he addressed the graduating class of 2016 of the Guyana School of Agriculture’s(GSA) 52nd prize giving exercise.

At the school at Mon Repos, East Coast Demerara,  Minister Holder stated that,  “The youth unemployment rate across the Caribbean averages 25 percent while here in Guyana this rate has been hovering close to 40 percent. It is clear that we can turn to our agriculture sector for aid in tackling this problem. Additionally, for the industry to attain sustainability, it must address the aging farming population by promoting greater involvement of our youths in agriculture.” 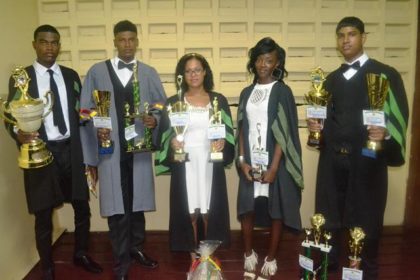 The Minister told the 156 graduands that the Ministry of Agriculture has, and will continue to have, clear and compact focus on attracting young people into agriculture, through the GSA.

Further the Minister said that the administration will undertake a complete review of the GSA’s curriculum during this year, to make it more relevant to Government’s policies. 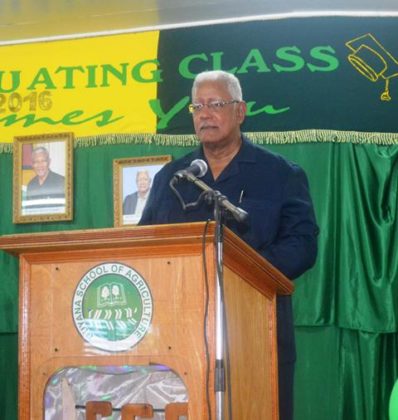 “Greater emphasis would be placed on the practical aspects of the programmes being offered by the school.  Exposure of students to the practice of agriculture in the various eco-zones will be pursued.  This will ensure that after training students can be placed in any region and would be able to function effectively without much further training since they would have had prior exposure in those regions,” the minister said. 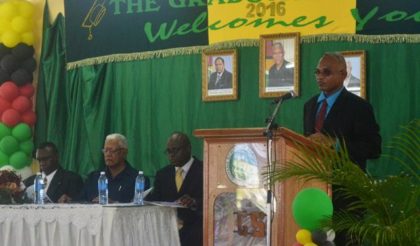 Turning his attention to agriculture as a source of sustainable employment, Minister Holder told the gathering, “Agriculture must be viewed as a profitable business rather than purely for subsistence, embracing this concept is key to revitalising agriculture in Guyana.”

It is envisaged that the GSA will consult with employers and employment agencies to determine their expectations, to increase the probability of graduates becoming employable.

Further, the GSA is considering giving assistance to graduates who have difficulty securing employment, through the creation of a programme of internship at appropriate collaborating partner institutions or businesses. 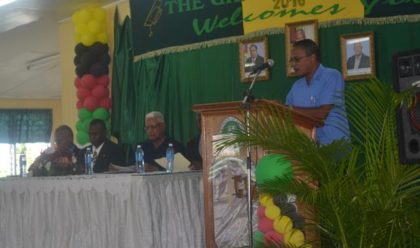 Students who are recipients of government’s scholarships will be afforded the opportunity to develop their skills and work ethics through placement at appropriate government institutions.

Minister Holder told the graduates, “Some of you are here on scholarships and will secure employment in the Ministry of Agriculture.  The government is affording you the opportunity to develop your professional knowledge and management skills in a specific field. Seize this opportunity with open arms and commit to the task at hand,” the minister urged the graduands. 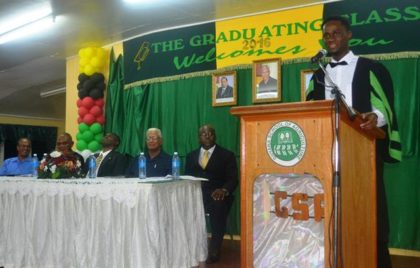 St. Kitts national and graduating student of GSA, Mr. Shevaun Johnson while delivering the vote of thanks at the graduation ceremony.

Underscoring the importance of job creation and self-employment in the agricultural sector, the minister encouraged graduates to become entrepreneurs.  “Some of you will be entering the labour force for the first time, but I want to charge you to be entrepreneurs, take the knowledge and the skills learnt here and apply them to your own businesses.  By doing this, you take control of your own future. I believe entrepreneurs are needed to drive tomorrow’s agriculture. The Ministry of Agriculture and its agencies are here to support you,” Minister Holder committed.

A section of the students during the graduation ceremony

Quoting the late great Nelson Mandela, Minister Holder encouraged the batch to further their studies because education is what will make them more employable and land them the job they desire especially in a globally competitive world. “Education is the most powerful weapon which you can use to change the world,” the minister asserted.

The minister further charged the graduates to be ethical in their business relationships. 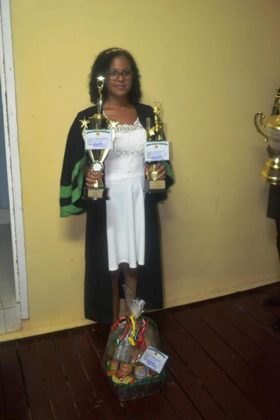 One of the most outstanding female graduates, Ms Anisa Mancey. She won all the special awards for her faculty

“For every business transaction you encounter, while it may be a challenge, you must ensure that all involved come out fairly. It is important that your moral qualities consist of fairness, kindness, dignity and integrity.  Do go forth with the flexibility in your thinking to know that money is not everything. You must treat each other well, be kind and have a spirit of service and contribution.”

The charge was delivered by Food and Agriculture Organisation (FAO) Representative Reuben Robertson who said he was pleased to see the ratio of males to females in the sector increasing.

He urged them to “Stay focused, disciplined and work towards achieving their goals,” as he charged them that real success depends on them and they must remain optimistic always. 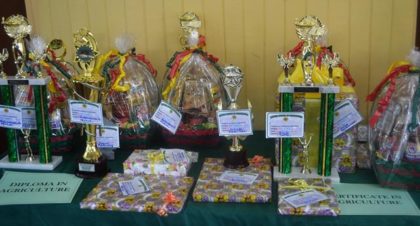 The institution is expected to undergo a number of organisational changes in the near future. Among the changes outlined by the Minister of Agriculture are curriculum reform, a systematic review of the school’s organisational structure, the development of a Strategic Plan, a Policy on Agricultural Education -to serve both the nation and the institution by focusing material and other resources in achieving the desired goals. 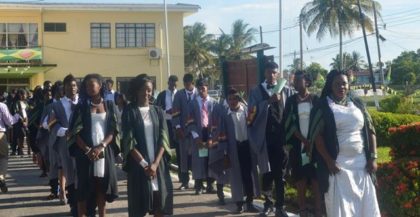 GSA has been collaborating with the Cyril Potter College of Education in increasing opportunities for Diploma Graduates in agriculture to be trained in a one-year professional teachers’ course.  As a result of this effort, the first ever one-year Professional Teachers’ Training Course for Diploma in Agriculture holders has been advertised and is likely to start in September 2016.