“This APNU/AFC Government has been doing tremendous work despite the rhetoric, the gossip, the fake information. We have for the first time, a fast runoff of water after heavy rainfall, the streets in Charlestown are well repaired and properly maintained, we have electricity on a constant basis. They are doing what they’re supposed to do and pound for pound in three years what I have seen is above and beyond what an ordinary government can do. The APNU+AFC are delivering.”

That was Charlestown resident, Randolph Corbin expounding on the development his community has seen in the three-plus years the Coalition Government has been in office. Additionally, Blossom Davis, the daughter of a long time Albouystown resident, noted the importance of parents updating their children on the current state of affairs. 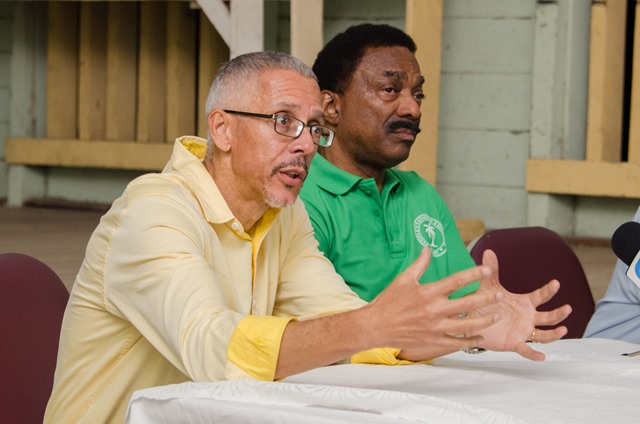 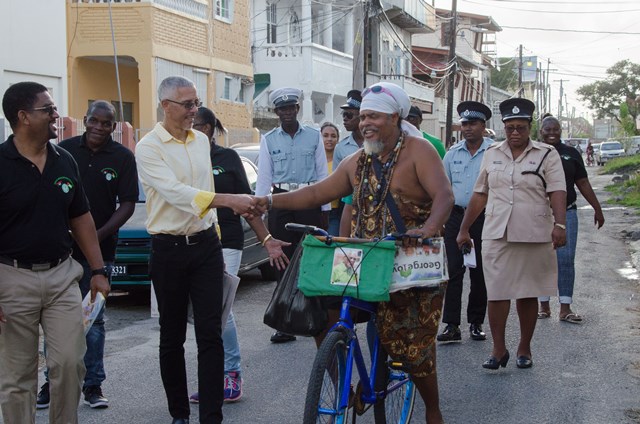 Minister of Business, Dominic Gaskin is greeted by a resident during his walkabout in the Albouystown/Charlestown area.

They were among others in the southern Georgetown constituency of Albouystown/Charlestown, who reaffirmed their resounding confidence in the Coalition Government today. The citizens were elated to have Ministers of Government visit their homes and businesses.

Constituency #10 is geographically the smallest ward in Georgetown and has seen significant growth over during the Coalition Government’s term.  Through the efforts of the several Government Ministries, the communities have seen a monumental difference in drainage systems, desilting, road maintenance and upgrades, community programmes, small business growth, lower crime rates and improved academic performance.

At a meeting held at the Dolphin Secondary School, Attorney General and Minister of Legal Affairs, Basil Williams SC., and Minister of Business, Dominic Gaskin dispelled the rhetoric being peddled by the opposition on matters surrounding the current political situation to residents of Albouystown and Charlestown.

The Attorney General further cited the transformation Guyana has experienced in the coalitions short term in Government.

“President Granger has a vision for this country, and I share his vision. I think with the course and trajectory we’ve been on, once we get the chance to continue, Guyana would never be the same again.”

Minister Gaskin reminded residents that GECOM is legally obligated to comprehensively update the Official List of Voters every seven years, an exercise not done since 2008.

During the Ministerial Outreach, the minister also visited several businesses within the area to better understand their needs.

Today’s public engagement served as a part of a larger outreach to several constituencies within Georgetown.