All regional hospitals’ theatres to be functional

Hospitals in the hinterland regions are to be equipped and adequately staffed to provide surgical services to residents. Director of Regional Health Services, Dr. Kay Shako said it has been recognised that the hospitals in Regions One, Seven, Eight and Nine have not been providing such services and depend only on surgical outreaches to meet the needs of the residents.

“Lethem and Mabaruma theatres are functional, but they depend on surgical outreaches. Soon these hospitals will have their own specialists, but as for now they are still dependent on these outreaches,” Dr Shako said. 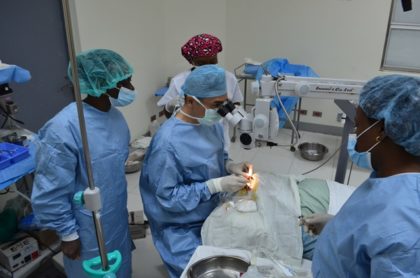 Doctors performing a surgery in the New Amsterdam Hospital theatre

The Bartica Regional Hospital benefited from a recent upgrade and would no longer have to depend on these surgical outreaches. The theatre at this hospital is now functioning with the necessary specialists such as general surgeon, orthopedic surgeon, gynaecologist and obstetrics surgeon.

“Bartica Hospital, we can clearly say would have been in an equitable position like the regional hospitals within the coastal area.” Dr. Shako added.

The major hospitals in Regions Three, Four and Six, namely West Demerara Regional Hospital, Georgetown Public Hospital Corporation and the New Amsterdam Public Hospital, have been recognised as specialist hospitals, providing efficient healthcare by way of surgeries in a number of areas.

Other surgical units, such as at the Mahaicony Cottage Hospital are not functional due to issues that are being currently addressed by the Regional Health Services. The surgical theatre at this hospital is expected to be functional shortly. 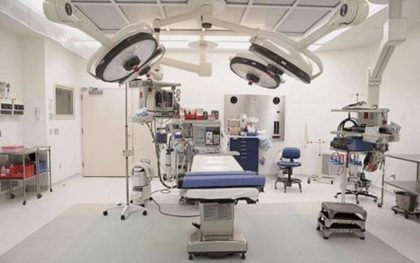 Dr. Shako pointed out that, “All these theatres are equipped with the requisite equipment to have surgeries done but not all are staffed; they just need the specialists to work within these areas.”

The Regional Health Services is seeking to correct this by deploying doctors from the Cuban Medical Brigade and local surgeons to work in the regional hospitals so as to reduce the number of referrals to the GPHC.

Problems experienced by doctors and surgeons during surgeries are reported to the Regional Health Services and are addressed so as not interrupt the health care service which is expected to be provided.