Following yesterday’s ground-breaking ceremony at the CARICOM Secretariat, Non-Resident Ambassador of Japan to the Co-operative Republic of Guyana, His Excellency Tatsuo Hirayama paid a courtesy call on Minister of Foreign Affairs, the Honourable Karen Cummings. Among areas of mutual interest, they discussed the areas of collaboration between the two countries, including the Project for the Introduction of Renewable Energy and Energy Efficient Power System, which is being financed by the Government of Japan. 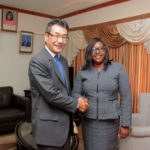 Non-Resident Ambassador of Japan to the Co-operative Republic of Guyana, His Excellency Tatsuo Hirayama calls on Minister of Foreign Affairs, the Honourable Karen Cummings. 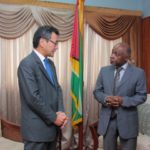 Ambassador Hirayama also called on Foreign Secretary, the Honourable Carl B. Greenidge, during which the Ambassador congratulated Guyana on the successful start of oil production as well as the country’s focus on renewable energy. The Foreign Minister in return expressed his pride in the long-standing relationship between the two countries and the cooperation in energy among other areas. They also discussed national elections and the upcoming jurisdictional hearing at the ICJ.

Guyana has benefited from general grant aid, small scale grant aid, training programs under the Japanese International Cooperation Agency (JICA) and the use of Japanese expertise in several areas. In addition to the photovoltaic power generation system, and the building of an energy management system for the CARICOM Secretariat, Guyana stands to benefit from the improvement of the efficiency of the power systems by enhancing the quality of the substation equipment and distribution lines within the City of Georgetown, and the surrounding areas, as well as to secure the procurement of the electric power distribution materials and reactive power compensator for GPL. Operations are currently ongoing at the Canefield substation site.