─ with proceeds from oil sector

Added to his government’s commitment to providing free education at the university level, His Excellency President David Granger today said that graduates currently paying off their student loans to the University of Guyana (UG) can look forward to an amnesty in his new government.

Proceeds from the oil and gas industry have already been earmarked to ensure free education from nursery to university all across Guyana. The decision to grant a reprieve for UG students in this regard is another promise in the government’s plan for the “good life.” 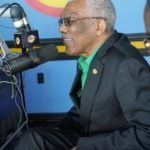 His Excellency President David Ganger during his interview on 94.1’s “Hot Seat. 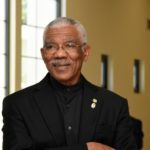 The Head of State said while the repayment of loans is a legal obligation, his cabinet will soon deliberate on the proposal.

“Some paper will be brought before the cabinet to grant an amnesty so that they will enjoy the benefits of free education so that they will not have to pay the money for which they are indebted. This project that we are embarking on depends on the flow of revenue from the petroleum industry,” he said during an interview on the 94.1’s “Hot Seat” radios show.

Referring to his government’s policy for free university education, the president said that the move will allow for “brain gain” rather than “brain drain.”

According to the Head of State, qualified Guyanese are already making their way back home. There is no doubt, too that the economic changes already taking place because of the oil sector, will cause a reverse the brain drain experienced in the past.

“I don’t have a choice, but to give free education to allow my government to train scientists, technologists, engineers, mathematicians to develop this country and the best way to do that is by giving them free education.

“People will be able to get better-paying jobs right here in Guyana. Guyana is the fastest developing country in the English-speaking Caribbean. I am not afraid of free education. It is something that is enshrined in the constitution. It’s not an invention, it is embedded in the constitution.”

President Granger said the government will ensure that everyone enjoys the full benefits of nursery, primary and secondary education.  He noted that the provision of free education existed in Guyana for more than 40 years before the opposition took office in 1992.

Meanwhile, the Head of State also defended his government’s performance over the past four years, stating that it is enough to see the Coalition retaining office on March 2.

He said the APNU+AFC is the only party that has presented a manifesto that lays out its plan for the next ten years.