– Min. Felix reminded residents the region has an abundance of resources

Residents of the community of Aranaputa in the North Rupununi were reminded that the region has an abundance of resources which can be utilised to meet the needs of its people.

This was expressed by Minister of Citizenship, Winston Felix during a visit to the community on Saturday, as part of a government ‘fanout’ exercise in the Upper Takatu-Upper Essequibo Region. The minister’s first stop was at the Aranaputa Block Making facility where he handed over several supplies. These included a generator, water pump and wheelbarrows.

The Citizenship Minister called on the residents to ensure the project is properly managed so that it can generate income for the village.

“Manage it so it would have longevity and serve you for years to come, until, you can then create wealth and move from a shed to a complex” he urged. 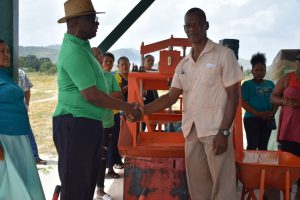 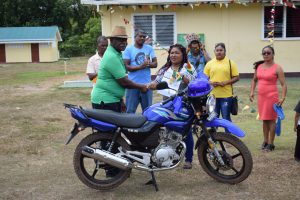 Minister of Citizenship, Winston Felix hands over a motorcycle to Secretary of the Block Making Committee, Mercie Stephna 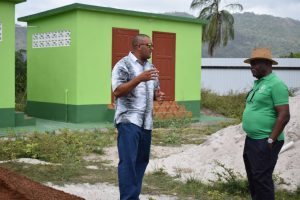 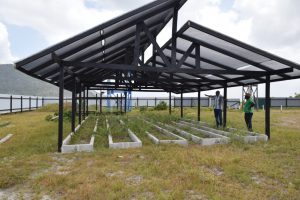 Minister of Citizenship, Winston Felix was given a tour of the shade house at the Aranaputa NDC ground

Minister Felix emphasised that with proper management, the facility can become one of the leading suppliers of concrete bricks in the region. He further encouraged the residents to continue this spirit of innovation.

“Along with this block making facility, I want to encourage you to look to other areas in which you can initiate growth and development,” Minister Felix said.

Neighbourhood Democratic Council (NDC) Chairman, Virgil Harding expressed appreciation for the supplies and assured the minister that it will be allocted to priority areas.

Echoing similar sentiments as the NDC chairman, Michelle Alexander, Chairperson of the Block Making Committee noted that the new equipment would significantly benefit the villagers especially the youth.

Minister Felix also donated sport gear to the residents in the community as well as a motorcycle which will enable the council officials to carry out their duties more efficiently.