Residents of Bartica in Cuyuni Mazaruni today came out to cast their ballots for the 2020 General and Regional Elections.

As the polls for the General and Regional Election opened at 06:00am across the country this morning, 38- year old Joan Rupertee of Sixth Avenue Bartica was among those to cast her vote early. 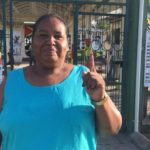 Early voter Theresa Riedwald urged other to come out and exercise their civic duty. 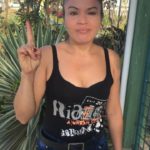 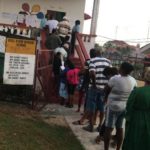 Residents of Bartica queuing at the Hillview Nursery School to vote.

The 38- year old felt, “good” having exercised her democratic right. She proudly stated that her ballot was toward ensuring that ‘betterment’ continue. She further stated that the process was smooth and she encountered no problems.

Another voter, 49-year-old Theresa Riedwald of Fifth Avenue Bartica, urged her fellow Barticians to come out and vote. She reminded that “everybody has a right to choose whatever they decide is best”.

Sherwyn Downer, 39 of Sixth Avenue Bartica, commended the Guyana Elections Commission for facilitating what he described as a “smooth process so far.”

Ervin Washington of Fifth Avenue Bartica noted the day will be in one in the history of the country. He opined for the ongoing development to continue on its current path, “everyone must come out and vote. “This is what Guyanese have to do.”