─ targets youths from ages 8 to 21

─ close to 1,000 youths exposed to essential training in several disciplined areas in 2018

─ “ever since we launched, success has been evident especially in the area of our social Crime Protection Programme and Initiatives” – Inspector Grosvenor

─ 2019 to have more intriguing courses and topics – co-coordinator

The Guyana Police Force (GPF) ‘B’ Division has announced that during 2018, close to one thousand youths residing in the Ancient County and on the West Coast of Berbice, benefited from community youth empowerment and skills enhancement groups it since its establishment in 2015. 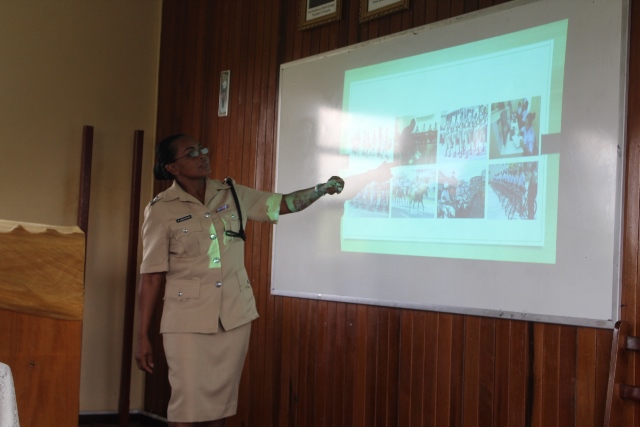 Community Relations Officer (CRO) for ‘B’ Division, Inspector Margarett Grosvenor told the Department of Public Information (DPI) on Monday, that the project is one which falls under the Community Relations Department and is focused mainly on providing youths from ages 8 to 21 years, with essential training in several disciplined areas.

According to her, thus far, there are approximately 17 groups of youths established throughout Region Six and three in West Coast Berbice (WCB), benefiting close to 1,000 youngsters already.

The Community Relations Officer disclosed that the group members were exposed to courses, in Information Technology (IT), auto repairs, welding and fabrication, cosmetology, hairdressing and cake decoration. They also benefited from subjects such as workforce enhancement, environmental and crime prevention activities. According to the Inspector, these programmes are focused on channelling the energies and attention of the youths in a positive direction.

Further, the CRO said, “when all groups meet weekly there is a group interaction, which is done with the aim of creating a healthy social environment. The discussions also aid in their interpersonal skills. We also managed to reach out to the community in different forms demonstrating that the police are not only about apprehending violators of the law, but also work at preventing persons from becoming potential offenders and responding to social concerns and issues as far as practicable.”

Grosvenor said group members were engaged in several cops and faith intervention activities, by providing counselling and empathizing with families who were victims of robbery, disaster, life’s misfortune or any situation that unfortunately resulted in a loss of life.

“Ever since we launched, success has been evident, especially in the area of our social Crime Protection Programme and Initiatives,” the officer opined.

It was also highlighted that participants were fortunate to have received lectures on drug abuse reduction education (DARE) and other social issues and were tasked to engage several schools on the various topics.

The CRO has since indicated that they are more intriguing plans for 2019, but those will be announced as soon as the other stations submit their programme to the Divisional Head Quarters.

The move by the police in Berbice to implement such an initiative is highly praised by residents and Inspector Grosvenor emphasized that it’s the effort of the Community Relations Department to foster a better relationship with the communities and citizens.