The bid protest committee, established on June 15, 2016, by a Cabinet decision has been cleared to proceed with its work, Minister of State; Joseph Harmon told the media today.

“This committee will complement the work of the commission (Public Procurement) to further government’s commitment to transparency in the public procurement process.”

Minister Harmon, speaking at the post-Cabinet press briefing today, said, “the bid protest committee will adjudicate over complaints filed by aggrieved contractors for a fee of $50,000 plus 1% of the bid sum in question.”

Minister Harmon further explained that the work of the committee was prevented from starting at an earlier time because, “there was some concern about when the first Cabinet decision was made about contract sum and that led to some amount of hold up of work of the bid committee. It is now clear, it’s now clarified that we are talking about 1percent of the bid sum. That should now clarify and clear the way for any protests that are before the committee to get that done.” 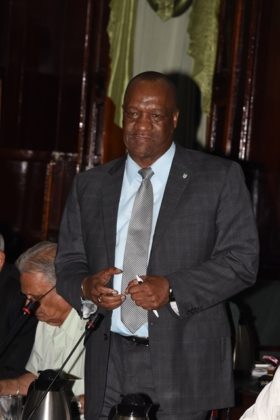 Minister Harmon stated that, “this committee will complement the work of the commission to further government’s commitment to transparency in the public procurement process.”

“Cabinet noted with satisfaction that the commission received the unanimous consent of the House when the matter came up on Monday evening,” Minister Harmon added.

The names were extracted from a list of 29 nominees and were arrived at by unanimous decision of the PAC at its 17th meeting on July 20, 2016.

When fully operable, the functions of the PPC will be to make regulations governing procurement, review decisions of procuring entities, adjudicate debarment proceedings and to determine documents for public procurement such as bidding, pre – qualification, evaluation and contract forms to be entered into.

Minister of Social Protection, Volda Lawrence speaking on the adoption of the report of the Public Accounts Committee

The recent recommendations of the PAC ended efforts to have a fully constituted and functioning PPC after an Act was passed in the National Assembly for its establishment, during the 8th parliament in 2003.

The Act required a two- thirds majority vote to accept the nominees selected by the government and opposition, before the commission could come into being.

Previous attempts to realise the establishment of the much touted PPC were met with failure.

According to member of the PAC, Minister of Social Protection, Volda Lawrence, after the realisation of the PPC Act in 2003, the PAC immediately established a sub- committee consisting of Donald Ramotar and Lance Carberry to examine the nominees. There were 10 candidates identified. The committee deliberated for three years without agreeing to any nominee, Minister Lawrence stated.

In the 9th parliament, the PAC was chaired by Lawrence who appointed Winston Murray and Komal Chand to identify nominees for the PPC. Emily Dodson was nominated by the then PNCR/One Guyana. After 92 meetings of the select committee, the People’s Progressive Party /Civic (PPP/C) failed to name its nominees.

In 2012, the PAC was chaired by Carl Greenidge who sought to have nominees named for the PPC. The Prorogation of parliament by the then government brought the work of this committee to an end.

At the beginning of the 10th parliament, Irfaan Ali was elected Chairman of the PAC. During November 2015 there were agreements to re-advertise for nominees to the PPC. 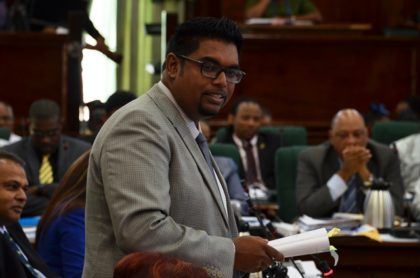 In acknowledging the success of this most recent select committee, Lawrence said, “All of Guyana wants to see transparency, accountability and more so a level playing field in the tendering process and today, this new day, all of us, government and opposition, have brought to an end a journey which began some 13 years ago.”