Several important bilateral agreements and Memoranda of Understandings (MOU)will be signed at Guyana’s inaugural International Civil Aviation Organisation (ICAO) Air Transport Meeting in November. These agreements will finalise the arrangements to facilitate flights to and from African countries. 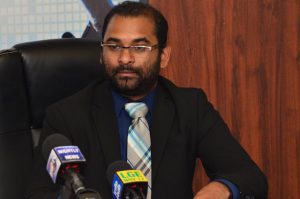 Providing an update at a press briefing on Wednesday, at the Guyana Civil Aviation Authority’s (GCAA) headquarters in Kingston, Director, Air Transport Management, Saheed Sulaman said the bilateral agreements and MOUs will be signed with several countries including Aruba, Tanzania, Ghana and possibly Nigeria among others.

“We have slated on the card the signing of an MOU with Aruba to deal with air services. We are awaiting final confirmation from the Governments of Tanzania and Ghana on their availability to sign an air services agreement with them as well, to facilitate airlines to operate between markets,” Sulaman explained.

According to Sulaman, Tanzania and Ghana were selected since Ministers from those countries will be in attendance at the conference. He said the agreements have already been negotiated and are awaiting Ministerial signatures.

The conference officially opens on November 21, at the Arthur Chung Conference Centre under the theme, “Promoting connectivity for sustainable air transport development.”

Sulaman said GCAA is on target for the hosting of the conference and the draft agenda is already available for all 192 ICAO countries.

“To date, we have received confirmation from about 25 countries and more are coming onstream daily. From that number, some Caribbean states have not yet have confirmed their participation. We have confirmed registration in excess of 150 delegates so far and that number is growing daily. We have on board all the CARICOM member states along with many countries from Africa,” the Air Transport Management Director said.

There will be six sessions covering topics such as maximising economic benefits of aviation in the region, harmonising the air transport regulatory framework and air transport and stimulating investment among several areas.

On the final day of the conference, Prime Minister Moses Nagamootoo will open the third Africa Diaspora meeting under the theme ‘Special event promoting air links between African states and diaspora, turning words into action’. This forum will address the framework of the African Union’s declaration of the global African diaspora summit.

Other events on the agenda include a cocktail reception, gala dinner, heritage tours and art and craft exhibition.