The PSC met with officials from the bauxite company, Bosai on Monday at Watooka House, Linden. Also in attendance were representatives of the National Association of Agricultural, Commercial and Industrial Employees (NAACIE) and Regional Vice Chairman, Elroy Adolph.

At the top of the meeting’s agenda was clarifying the quality of bauxite ore being exported. Chairman of the PSC, Opposition Member of Parliament (MP), Odinga Lumumba questioned whether any agency analyses the bauxite ore before it is shipped out of the country. Technical Services Coordinator of Bosai, Wainewright Bethune replied, “I don’t know if there is any entity coming here to verify what we have in our storage bin.”

The power plant operated by Bosai

The concern about the quality of the ore was raised by Councillor Charles Sampson last week when the PSC met with Region Ten Councillors. It was clear during that meeting that Linden residents were highly sceptical of the bauxite company’s operations. Bosai, a Chinese company, has been operating the bauxite plant and mines in Region 10 for the past 10 years. Company officials went on the defensive when their operations were questioned.

The committee was further told that information on the processing of the mineral is presented to the Guyana Geology and Mines Commission (GGMC) which is the regulatory body for the sector. “Every month we supply a report to GGMC stating our stripping, mining, and production,” Bethune clarified.

The PSC members acknowledged that they were not aware of the GGMC’s role. Lumumba then suggested a quarterly visit by the regulatory body to “check the silos” but Company Secretary, Norman McLean pointed out that GGMC already does this. However, Lumumba said the GGMC should analytically check the quality of Bosai’s bauxite. 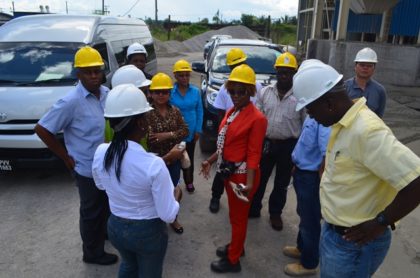 Members of the Parliamentary Sectoral Committee on Natural Resources and officials of Bosai before beginning a tour of the company’s bauxite plant.

Additionally, committee member and resident of Linden, Jermaine Figueira proposed that Bosai re-evaluate its public relations programme. The MP noted that the community needs to be educated on the company’s activities in the sector.

“We need to have a better PR with regards to Bosai’s operation within the community so that the community can really buy in to what Bosai is doing and have a greater understanding,” Figueira said.

Bosai’s General Manager, Robert Shang told the Government Information Agency (GINA) that the company will consider the suggestion. “Right now actually we have a radio programme every two weeks and also a quarterly TV programme but after this meeting I will discuss with my PR personnel and see what best we can do,” said Shang.

Rutherford added that if the company does not want to provide the information to the public, it is up to the government to take up the responsibility to properly inform the community on what is happening in the sector.

Meanwhile, Figueira pointed out that employment remains a concern for the community, noting that “there is a great shortage of employment opportunities” since Bosai took over the operations.

Addressing this concern, Shang noted that Bosai is exploring tapping into new markets such as “MAZ bauxite which is the metallurgic grade bauxite. Once those projects can be realised, we can create another 500 or 600 jobs for future,” said Shang.

The General Manager meanwhile pointed out that the market for the calcine bauxite is shrinking and Bosai is “looking into all possibilities to improve our sales situation.”

McLean added that Bosai tried the MAZ bauxite project earlier this year, but was not successful. “We want to move about 500,000 tons of metal grade bauxite which is the MAZ,” McLean explained. The programme was stymied by the “logistics of the movement of the bauxite.” A feasibility study has been launched in this regard.

The company has also begun a study aimed at investing in the manganese project in the North West “as a backward integration process for what we’re doing,” McLean explained. An overseas team is expected to be in the country next month to do due diligence, he added.

Turning to workers’ relations, Bosai officials were questioned by Rutherford about computation of workers salary.

Last year, the Ministry of Labour ruled that Bosai’s computation of workers’ salary was not in accordance with labour laws.  At the meeting on Monday, NAACIE’s General Secretary, Kenneth Joseph told the PSC members that Bosai has since taken the matter to court and therefore it is sub-judice.

The issue of workers’ health and safety was also raised. In the past, workers have raised their concerns about the conditions that they have faced while employed at the company.   Bosai officials insisted that the full complement of safety equipment is provided to workers, rigorous

vehicle maintenance is observed and visit in the mines are done to ensure employees are comfortable.

Union representative Joseph said that from time to time, issues would arise. One is the quality of the safety boots provided and the time it takes to replace gear. Joseph said the company addresses these issues when they arise, but not to the union’s satisfaction. He then promised to provide the PSC with a list of concerns that the union was asked to address after a request for same was made by Lumumba.

NAACIE’s branch chairman, Linnell Warden questioned when the ‘no tax on overtime’ will be applied. Councillors during last week’s meeting also queried when this application would take effect.

In December, Minister of State, Joseph Harmon at a post-Cabinet briefing announced the restoration of tax free overtime benefits for bauxite workers.

Bauxite workers were afforded tax free overtime from 1988 but in 2007 the PPC/C administration had disallowed the provision.

Meanwhile, MP Rutherford raised his and the residents in general concern about power generation in the region. “Recently we’ve been getting more than enough of our share of power outages,” Rutherford pointed out. He asked the company to provide an update on equipment status and power generation capacity.

Shang said that outages are as a result of line distribution. There are two utility companies in Linden that are responsible for the distribution of electricity.

Bosai’s power plant generates electricity for its operations and the Linden community with six Wartsila generators, along with two additional sets that are not in use. Complementing the existing sets, are three Caterpillar generators the company rents from McCorp. The latter are used during peak hours (6pm to 9:30pm) when all the Wartsila generators are not functioning.