‘Breastfeeding, a natural and healthy process with benefits’ – Min. Lawerence

The Ministry of Public Health (MOPH), Food Policy Division, along with several mothers and supporters on Sunday ventured on a breastfeeding walk, in Central Georgetown, to launch and celebrate 16 years of Breastfeeding Week 2017 in Guyana.
Under the theme “Sustaining Breastfeeding Together”, this year’s breastfeeding week aims to reduce poverty, protect the planet and ensure prosperity by 2030.
In her feature address, Minister of Public Health, Volda Lawerence emphasised the importance and benefits of breastfeeding for both mother and child noting Breastfeeding should be an ongoing action and not only be observed during breastfeeding week.
Stressing the importance of togetherness, Minister Lawerence said while the action is also part of the administration’s Sustainable Development Goals, the country as a whole has a target to meet, and it does not only involve the work of the government.
“As a nation, by 2030, we have to ensure that we end the preventable deaths of newborns and children under age five. We should aim to reduce the neonatal mortality to at least 12 of one hundred live births, and under five mortalities to at least as low as 25 per thousand live births.” 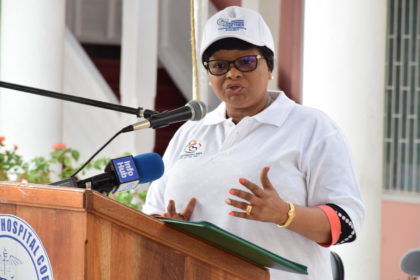 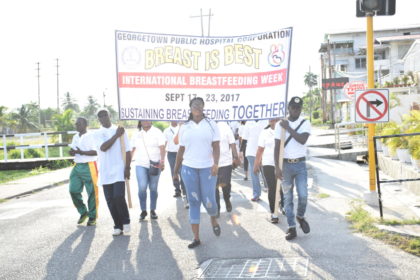 Public Health staff and supporters at the Breastfeeding Health Walk 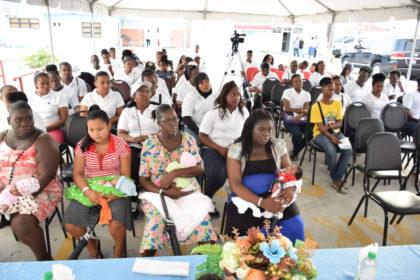 Public Health staff and mothers at launch of Breastfeeding Week 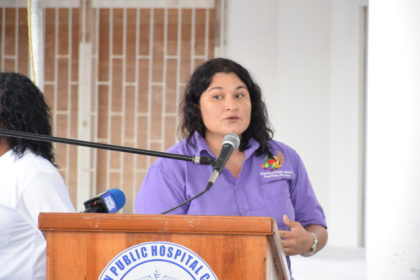 Directly addressing the mothers and particularly those breastfeeding, the Minister described breastfeeding as a natural and healthy process which provides a wide range of benefits. She said, “Sometimes, people don’t see the benefit because it does not have a cost to it”.
Despite the myths and challenges of breastfeeding, she is admonishing all health centers throughout Guyana to inform mothers about the benefits of breastfeeding in the most relatable terms.
“There are medical benefits to the mother; the releasing of hormones and it helps the reproductive organs to return to the pre-pregnancy size. It also helps with cancer, both ovarian and breast cancer”, said Lawrence.
In relation to Breastfeeding in public, the Minister said her Ministry is pushing Social Protection Ministry “to champion breastfeeding spaces throughout work environments for mothers”.
Also making remarks, Director of Food Policy Division, MOPH, Dinte Conway said the breastfeeding process is one that should be observed not only by mothers but also as a family, including the support of fathers and other relatives.
Conway also stated that the process serves as food security for infants, and is free food when compared to formulas. “Breastfeeding is a key componence of sustainable development, for instance, ending poverty. Breastfeeding is a low-cost way of feeding babies and children”, said Dinte.
The Director commended the Public Health Ministry for achieving the Baby-friendly Hospital Initiative status in 2016 despite many challenges faced, and for always observing Breastfeeding Week in Guyana.
Some of the mothers along with their babies, who participated in the Walk, shared their views on breastfeeding with the Department of Public Information (DPI).
Keziah Skeete: “I believe breastfeeding is essential in every single meaning of the word. Despite it taking a lot of energy from the mother sometimes, you are left with a healthy baby and it has benefits for you as a mother.”
Shubrena Bell: “This is my second child and it is a privilege to be a mother again. Breastfeeding I consider as a very important thing. Not only for a baby but me as well.”
Niomi Sampson: “This is my first child and it feels good to be a mother. Breastfeeding is the most efficient formula for our babies, it is free of cost, so I encourage all mothers out there to breastfeed their children.”
Guyana is also celebrating 25 years of breastfeeding week on the international level.