Embassy of Guyana, Brussels, Belgium, February 27, 2020 – Over 100 members of the Guyanese Diaspora participated in a diaspora engagement event as part of 50th Anniversary of the Republic of Guyana which was hosted by the Guyana Embassy in Brussels.

The event which attracted members of the diaspora from The Netherlands, France, Finland, Luxembourg, Germany and Dubai, provided an opportunity for the diaspora to reflect on the achievements made over the past 50 years and to be updated on development plans going forward. 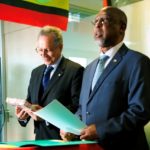 His Excellency Ambassador David Hales expresses gratitude for the turnout. 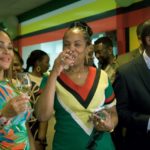 Attendees display their patriotism during the event. 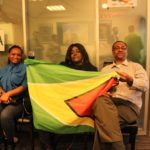 Attendees display their patriotism during the event.

In his presentation, His Excellency Ambassador David T.A. Hales expressed gratitude for the turnout.

‘It provides us with an opportunity to reflect on the progress achieved as well as the challenges our country and people have endured and overcome over the past 50 years.’

‘More importantly, however, it brings us together at a time of renewed hope and anticipation for a bright, peaceful and prosperous future for Guyana and its people over the next 50 years and beyond,’  the Envoy noted.

Ambassador Hales reminded that the theme for this 50th Anniversary is ‘Guyana Together’ which he explained reflects the common aspiration grounded in our motto ‘One People, One Nation, One Destiny.”

Drawing attention to Guyana’s Oil and Gas sector, Ambassador Hales noted that the country is on the threshold of major economic transformation that could result in it becoming the fastest growing economy in the western hemisphere and the envy of the world.

“With this newfound wealth, there has never been a better opportunity to build one of the world’s most prosperous societies – one where every citizen can join in Guyana’s unprecedented good fortune – where every community can partake in our extraordinary rise – and where each and every Guyanese, including the cherished diaspora, can sustain the country’s development by making skills, accomplishments and experience available to our dear land.’

The Brussels Mission, inter alia, fosters Guyana’s economic and social development through garnering multilateral and bilateral technical assistance, while promoting the country as an investment, trade and tourism destination. The Mission also looks at securing export opportunities for traditional and non-traditional products, and pursuing support from the ACP Group of States on the Guyana-Venezuela Border Controversy.