The consideration of the estimates for Budget 2019, today, saw the Guyana Defence Force’s (GDF) capital expenditure of $1, 0142, 500 Billion and current expenditure amount of $12,977,028 Billion approved by the National Assembly.

In response to queries raised about the sum and staffers allocated to the Civil Defence Commission, Minister of State Joseph Harmon confirmed that the agency was now under the responsibility of the GDF. The increase in salaries was attributed to the increase in staff for the army. 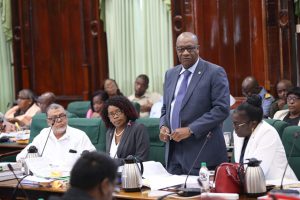 The Minister also informed the House, that the GDF utilises more local produce in order to decrease dependency on imported foods. The GDF is self-sufficient in pork, eggs and 20 percent sufficient in poultry, owing to its Land of Canaan farm. According to Minister Harmon, the facility also serves as a teaching aid for students.

The House was also informed that the allocations for Marine development include rehabilitation of the Ruimveldt female coast guard quarters, the Morawanna base, the Eteringbang Boat House and trailers for rapid deployment of the metal shark fast patrol boats.

It was also clarified that two Islander aircraft, costing US$300,000 each, were delivered and are being dismantled for a thorough inspection, in keeping with the requirements of the Guyana Civil Aviation Authority. The examination is being done at a cost of US$14,000 each. Two Skyvans are also expected to be delivered in the next few months. The aircraft fleet will be further supplemented by military spec/type drones to boost coastal and riverine security.

The GDF’s allocations are as follows: