Work on the 550-metre stretch began in September 2019 and was completed on February 14.

Minister Bulkan noted that the project had put an end to the residents’ 30-plus years of waiting for a proper road. 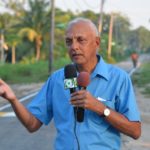 “To the two dozen and more household of this street, this project and this new roadway represents something transformative in your daily lives, and the central government is pleased that finally, and it would have been after many years of seeking help from the government, you have received the attention you the people deserved,” he explained.

Vice-Chairman, Region Four, Earl Lambert assured the residents that the regional administration would continue to work with them to address their infrastructure needs.

“The ministry will also be installing some streetlights very soon to light up the streetway for your safety,” Lambert disclosed.

A relieved Kamralam Mootoo, a farmer in the community, said he would no longer face difficulties transporting his produce to the market and having to pay persons to help him get through what was once “a mud dam.”

“I am pleased also because my children and grandchildren can go about their daily lives without getting their clothes nasty because during the rainy season it was swamp and we had to cross mini water pools to get in and out,” the farmer added.

Mother of five, Michelle Williams, who moved into the community just four years ago, recalled many days she kept her children at home because of the deplorable state of the road.

“Vehicles refused to come into our village, families refused to walk after dark, but now with a new road and streetlights on the way, my family and I are very happy,” Williams stated.

Meanwhile, Regional Executive Officer, Pauline Lucas disclosed that the National Drainage and Irrigation Authority had awarded the contract to rehabilitate a sluice on the Alliance Road.