Legal Metrology is the science of measurement or a system of weights and measures which generally covers requirements related to trade and to health and safety.

Lloyd David, Public Relations Officer (PRO) of the GNBS, told the Government Information Agency (GINA) that the bill will be drafted to review the obsolete 1981 Act. 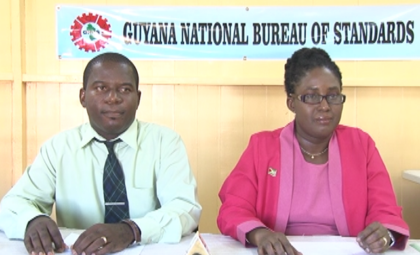 “Currently we have our 1981 Weights and Measures Act, 1981 to 2016 has been a while and we have recognised the need (for a new Bill), things have changed. What we intend to do is to relook at our Metrology Bill, revise our Metrology Bill and at the end when it becomes an Act we enforce the Act, and people will be satisfied,” David explained.

Representatives of the GNBS will be hosting public consultation exercises from September in all 10 Administrative regions, giving stakeholders the chance to learn about the current Act, and to contribute towards its revision.

The agency has projected a year-end deadline for the Bill to be presented in parliament. Head of Conformity Assessment Department, Candelle Walcott-Bostwick noted that after two sets of consultations, the information will be compiled and forwarded to the Minister of Business and Tourism for the document to be tabled in Parliament.

“I would foresee an end-of-year deadline because after the consultations, the second round of consultations would have been completed, we would send it to our subject minister which he is going to deliberate on, and then take it to parliament,” Walcott-Bostwick stated.

Once the revised act is passed in parliament, it would encourage manufacturers using weighing and measuring devices to comply with the rules and regulations of the Act. The Legal Metrology Bill will impact the manufacturing industry which depends on these devices for trade and the generation of income.

The Bill will also provide GNBS with the capability of verifying accuracy of weights and measurements taken in all sectors.

Upon the passing of the revised act in parliament, the GNBS would further seek to expand the Legal Metrology services that are currently being offered at its laboratory.

A National Metrology Institute is in the pipeline for establishment in a few years’ time.