At the close of the three-day Justice IMPACT seminar, the decision was made to establish a regional mechanism to address issues affecting Indigenous Peoples of the Caribbean. 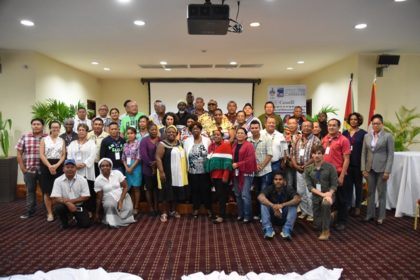 Indigenous representatives pose for picture at the conclusion of the seminar.

The discussions had centered around what type of mechanism should be formed, its ownership and sustainability. Representatives posited that there needs to be consultation with Indigenous peoples of the different localities before the body is formally established and electing representatives.

Jean La Rose, Executive Director of the Amerindian People’s Association of Guyana, while speaking to Info Hub, stated that the issues affecting Indigenous people in the Caribbean region are common, therefore, such a regional body will give them a stronger unified voice.

“Latin America, because of the number of countries and because of the large population as opposed to the Caribbean countries, often receives the attention and dominates. We are hoping that forming a separate caucus we can have more visibility for the Caribbean indigenous peoples,” La Rose explained.

Representatives of the other groups also spoke of their expectations. 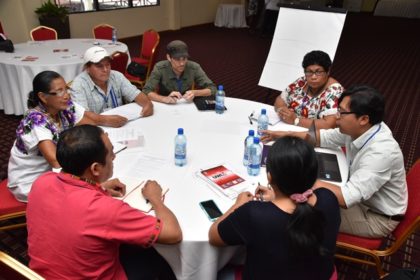 Indigenous Leaders of Guyana in discussions.

Cynthia Ellis Topsey, President of the National Garifuna Council of Belize: “For us, this linkage is a powerful opportunity to share and to learn and to be strengthened, we intend to be in dialogue with the Organization of American States and the United Nations. However, our job at this three-day gathering is to be equipped and informed to return and have serious discussions with our people in the indigenous communities.”

While Pablo Mis a representative of the Mayan Leaders Alliance said, “What we see moving forward is a regime a mechanism that truly is grounded in the people. This would allow us to become a partner in fulfilling the national and international obligations of our countries as we aspire to develop an inclusive and free society.”

The three-day seminar was facilitated by the Improved Access to Justice in the Caribbean (IMPACT Justice) a five-year Regional Justice Sector Reform Project funded by the Government of Canada. 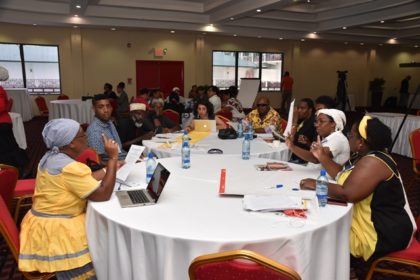 Garifunas of Belize engaged in discussions. 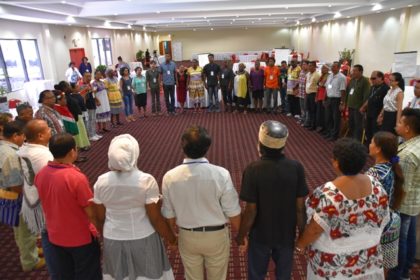 Indigenous representatives in prayer and chant.