The 34th meeting of the Board of Directors of the Caribbean Centre for Development Administration (CARICAD) was officially opened this morning in Georgetown by Prime Minister Moses Nagamootoo.

Addressing Ministers of Government, Caribbean Community (CARICOM) officials and public service stakeholders at the Pegasus Hotel, Kingston, Prime Minister Nagamootoo stated that the Government of Guyana was extremely pleased to host the meeting, since the efficiency of the Public Service is an issue that is very high on his government’s agenda. He told the gathering that his administration stands committed to addressing the deficiencies in the Guyana Public Service. 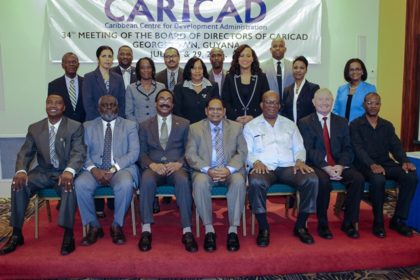 Members of the Board of CARICAD pose for the official photograph with Prime Minister Moses Nagamootoo, Attorney General and Minister of Legal Affairs Basil Williams and Finance Minister, Winston Jordan.

“Our Government has been in office for just over a year.  We met a public service that has been demotivated for many years.  The public service had been undermined by the political directorate and tainted by, what had grown like a cancer, systemic and pervasive corruption,” the Prime Minster said.

One of the mechanisms, he explained, that has been put in motion is the establishment of a Commission of Inquiry to query the current operations of the public service. It was mandated to make recommendations to develop a more effective and efficient public service.

“Against this background, the Government of Guyana welcomes you, the members of the Board of Directors.  For us, CARICAD is a valuable resource for experience sharing as we seek to implement the recommendations of that Commission,” the Prime Minister stated.

On May 21, 2015, President David Granger announced that the coalition government will establish a Guyana Public Service Staff College to ensure that public servants are equipped and inculcated with skills and knowledge to carry out their functions professionally. 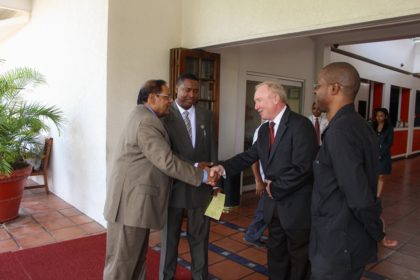 Prime Minister Moses Nagamootoo greets Chairman of the Board of Directors of CARICAD, Dr. Peter Allen on his arrival at the Pegasus Hotel

The Prime Minister informed those gathered at the meeting that Guyana has received significant help in its efforts to improve its public administration and delivery of public services.

“I was informed that CARICAD helped in building capacity at the Guyana Post Office Corporation and the Guyana Water Incorporated in the wake of the merger between GUYWA and the Georgetown Sewerage and Water Commission.  Interventions by CARICAD in other Caribbean states have impacted on accountability, good governance and openness,” he said.

More recently, Guyana benefited from CARICAD/CARICOM IMPACS programme through the training of Immigration Officers in certain areas of Border Security and in understanding and applying the provisions of the Revised Treaty of Chaguaramas with respect to rights of citizens within CARICOM under the regime for the Free Movement of Skilled CARICOM Nationals.

“We also benefited from CARICAD’s expertise to produce a Strategic Plan for our Civil Defence Commission to address comprehensive disaster management in all regions of our country…today our Civil Defence Commission has been transformed and has met every challenge, whether from flood or drought, with confidence and purpose,” the Prime Minister said.

Guided by CARICAD, Guyana intends to develop and sustain a strong leadership and governance framework within the Public Sector of the Caribbean Community.  Towards this goal, the Government of Guyana plans to establish a Public Service Staff College. The mission of the college is to develop dynamic public servants by improving their capabilities to serve the public sector without fear, favour or prejudice through the design and delivery of a wide range of needs-based, quality training and development opportunities.

“It is our hope that the college will also produce a cadre of public servants who are capable of presenting to their ministers the product of organised thoughts and collective experience,” the Prime Minister said. 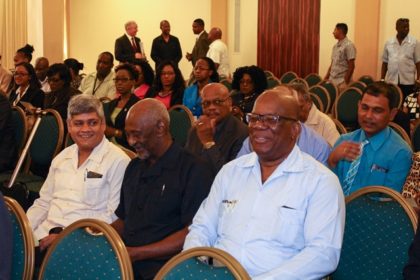 Chairman of the Board of Directors of CARICAD, Dr. Peter Allen stated that it is a time of great change at CARICAD, adding that the agency must continue to transfer itself to remain relevant, effective and accountable.

“Change brings opportunity, also we can face the future with a sense of hope and confidence, we as Caribbean leaders must demonstrate confidence in our own regional institutions…we must ensure that the CARICAD story of success is told more loudly and more widely.”

Over the years CARICAD has implemented several programmes to the benefit of the CARICOM region including greater use of Information and Communication Technology (ICT) in Caribbean Parliaments, a regional E-Governance Strategy, and chartering of an implementation guide for Caribbean Public Services.

Guyana also hopes to benefit from the expertise developed by CARICAD in matters related to ICTs and e-Government.   CARICAD’s role, supported by other regional and international institutions, in promoting e-Government as a vehicle for Public Sector Modernisation in the Caribbean region is recognised. Guyana is currently working to design and implement an e-Government strategy.

Giving brief details of the work undertaken by CARICAD over the years, the Chairman explained, “We have executed pioneering work on the regional administrative tribunal, planned and staged three public service commission conferences and staged a ministerial conference in which ministerial representatives from eight Spanish speaking countries participated.”

He called on the new board to do its part in governance, but to ensure that the necessary financial resources are provided for CARICAD and, “we must promote our institution as a first for transformation assignments in member states.”

Welcoming the participants to the two-day meeting, Interim Executive Director of CARICAD, Andre Griffith expressed appreciation to the government and people of Guyana for hosting the meeting, pointing out that excellent administrative arrangements have been put in place to ensure the success of the meeting. Griffith explained that over the years, CARICAD played an important role in the development of the Caribbean region’s public service. 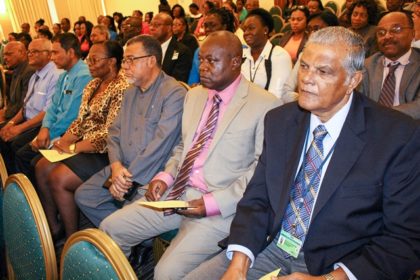 “In fact CARICAD was the agency that lead the production of the first manual of administrative procedures for the free movement which guides the public service in the countries where respective treaties have been signed onto and for good measures we also produced a plain English guide for citizens of the CARICOM region,” Griffith said.

The Directors of CARICAD hope to convene a Public Service Ministers conference, in Guyana in the near future. Prime Minister Nagamootoo advised the stakeholders that, “as proof of our continuing commitment, I can say to you now, that the Government of Guyana stands willing and able to once again serve as your host in this important regional endeavour.”

CARICAD is a regional inter-governmental organisation headquartered in Bridgetown, Barbados. It is an organisation which was established by CARICOM to promote, strengthen and upgrade the managerial and system capabilities of Public Sector entities within CARICOM Member states.

The centre’s main focus is the development of a modern, efficient and high performing public sector. The centre executes its mandate by undertaking technical assistance assignments and projects for client governments and public sector organisations.