Leaders of the Caribbean Community (CARICOM) have united to show their support for Guyana following the March 2, 2020 polls and urged parties who contested to adhere to the ruling of the Chief Justice (ag) Roxane George.

Prime Minister of Barbados and current Chairman of CARICOM, the Hon. Mia Mottley, at a media briefing at the Marriott Hotel in Georgetown earlier today, noted that Chief was clear in her ruling.

“Her ruling was absolutely clear that she expects the Returning Officer to either start a new or complete the process with respect to the SOPs, and we hope and pray that there will be an adherence to not just the law of the judgement, but to the spirit of the judgement,” the  CARICOM Chairman said.

PM Mottley particularly highlighting the last few paragraphs the Chief Justice’s ruling where she noted that “the transparent process that is critical if this country was to go forward.” 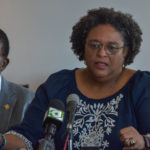 Prime Minister of Barbados and current Chair of CARICOM, the Hon. Mia Mottley 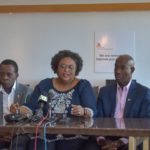 Following the delegation’s arrival in Guyana on Wednesday, PM Mottley said they met with His Excellency President David Granger, the Executive of A Partnership for National Unity +Alliance For Change (APNU+AFC), Leader of the People’s Progressive Party Civic (PPP/C), Bharrat Jagdeo, Members and Executives and Presidential Candidate of the PPP, Irfaan Ali.

The delegation also met with representatives of the other small parties and election observers.

Late in the evening another meeting was held with President Granger, leader of the opposition Bharrat Jagdeo and the CARICOM Heads. PM Mottley said both sides committed to abiding by the Laws and Constitution of Guyana.

The Barbadian Prime Minister reiterated the community’s commitment “to working with the people of Guyana for a free and fair process, transparent process.” She noted that there is much at stake for the Guyanese people and while CARICOM cannot get involved in the internal process of a sovereign nation, it has a vested interest in a transparent electoral process.

“Guyana is a founding member of the Caribbean Community and against that background, we are clear that as a community of sovereign nations we cannot get involved in the internal processes but we are family… … a family does not stand by and watch others in the family suffer without making themselves available to be able to aid the process.”

The CARICOM Chairman said it is indeed an exceedingly uncertain and challenging time and CARICOM itself must rise to the challenge and ensure stability from “the North in the Bahamas, to the South in Guyana and Suriname, from West in Belize to the East in Barbados.”

She urged the Guyanese to remain calm and work together to ensure peace prevails.