Georgetown, Guyana – (July 7, 2016) The Heads of Government of the Caribbean Community (CARICOM) have taken a strong position in support of a juridical settlement for the peaceful resolution of the long standing claim on Guyana’s territory by Venezuela.

President Granger, during the closing Press Conference of the 37th Regular Meeting of the Conference of the Heads of Government of CARICOM at the Pegasus Hotel, last night said, “This conference was an iteration of Caribbean solidarity… CARICOM gave its support to Guyana’s demand that the matter be settled peacefully through a juridical process… The community stands united behind Guyana… We hope that by the time the United Nations’ Secretary-General demits office at the end of this year, we would have had information confirming that we are going to court to settle this long standing dispute that has affected us for the last 50 years.”

CARICOM, in supporting a juridical settlement through the office of the Secretary-General of the United Nations, Mr. Ban Ki-moon, seemed to acknowledge in its Communiqué, issued at the close of the Heads of Government meeting, that a resolution would not only serve the interests of Guyana but also CARICOM, as this is a regional issue. 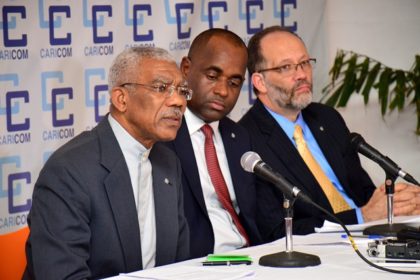 It states in the Communiqué that CARICOM “signaled their full confidence in the Secretary-General to exercise urgently his authority under the 1966 Geneva Agreement for a choice of options that would bring the controversy to a definitive and judicious conclusion that would be beneficial not only to Guyana but the Caribbean Community as a whole.”

President Granger credited CARICOM’s united stance for forcing Venezuela to rescind Decree 1.787 issued on May 26, 2015, which extended its maritime zone into the maritime space of many CARICOM states.  However, that Decree was soon replaced by Decree 1.859 on July 7, 2015.

Earlier in the day, President David Granger held a bilateral meeting with President of Suriname, H.E. Dési Bouterse on the margins of the Conference.  Today’s meeting, which follows closely on the heels of a talks between the two leaders in Suriname last week to discuss areas of mutual interest and the strengthening of bilateral ties, was held to discuss strategies for the peaceful resolution of Venezuela’s territorial claim, which according to both Decrees does not just threaten the territorial integrity of large areas of Guyana’s sea and land space but also sea space in the exclusive economic zones of Suriname, Trinidad and Tobago and other countries in the eastern Caribbean.

Recognising that their economic zone is included in the area described in Decree 1.859, Suriname’s President has engaged the Guyanese Head of State to determine how the two countries can work together with CARICOM to bring a peaceful resolution to the issue.

“Of course we have to look at the border situation with Venezuela and that we stay in line as good neighbours because a lot of countries of the Caribbean are affected by this Decree. We had sent an official note already but we had the time to discuss this with the [CARICOM] Heads so what we wanted to do is to ask His Excellency Granger if we can put our heads together and address this matter for a few of our sister Caribbean states and especially for Suriname and Guyana,” President Bouterse told the media following the meeting.

Minister of Foreign Affairs, Mr. Carl Greenidge, who was also present at the meeting between the Guyana and Suriname Head of States, noted that it was Guyana at the 2015 Heads of Government meeting that brought it to the attention of the CARICOM leaders that Venezuela’s claim was not just a Guyana problem.  He noted that it was at that time that Suriname indicated that it had already written to Venezuela on the matter of their sea space, which was included in Decree 1.859.

The Minister said that the two countries are now exploring how they can work together to ensure a peaceful resolution to the matter.

“A route to dealing with the border challenges has been identified… that can take us further and further away from a confrontation or conflictual resolution of the problem. That is what we want and in a sense that is what Suriname raised; the issue of trying to find a way forward that will avoid conflict and I am happy that they took that approach… The route starts with first recognising that you have common bilateral goals and interests. The two countries… [a] set of people with fairly common history and with resources that they can work with to exploit and if they don’t do that, they will find themselves both poor and both losing the synergy of having combined intellect,  combined human resources and so forth,” The Foreign Minister said.

While Decree 1.859 is in conflict with the established United Nations Convention of the Law of the Sea (UNCLOS) and could have been resolved using the set guidelines and rules therein, Venezuela has not signed or acceded to that Convention, though it maintains observer status.