Carvil Duncan still has other charges to face- Minister Harmon

Government is awaiting a decision from the High Court before moving forward with the Carvil Duncan matter, Minister of State, Joseph Harmon said. 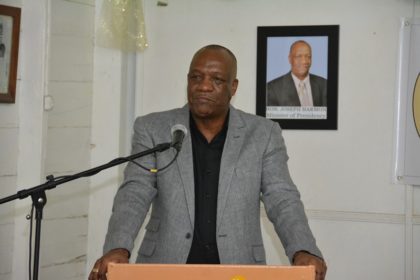 Minister Harmon told media operatives at a post-Cabinet briefing today that, “Mr. Duncan is charged with several offences; more than one, at least two other offences are to be dealt with. One of those offences, my understanding is, has been dismissed for wont of persecution and therefore there are two others to be dealt with.”

Harmon added that he would not want to comment further on the issue.

President David Granger had appointed a Tribunal to determine whether Duncan should be removed from his post as head of the Public Service Commission, and as a member of several other constitutional bodies, following fraud charges that were brought against him.

Following the tribunal’s appointment, Duncan had subsequently secured an Order Rule Nisi from the High Court to halt the works of the Tribunal while the magistrates’ court determined whether there was enough evidence for the case to go to trial.

On Wednesday, the court dismissed a charge against Duncan that he had stolen a large sum from the Guyana Power and Light (GPL).