Case against GECOM to resume at 13:30

–Elections can only be challenged once it is completed- Neil Boston

The case filed in the High Court against the Guyana Elections Commission by the Peoples’ Progressive Party has been postponed by Acting Chief Justice, Roxane George and will resume at 13:30 hours today.

This is after Attorney at Law, Neil Boston who is representing GECOM, requested time to adequately prepare for the case. 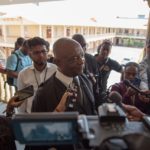 Attorney at Law, Neil Boston addressing members of the media. 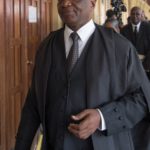 The case seeks to block the declaration of the results of the election and to have the votes for Region Four be validated. Boston said that the applicant of the case indicated to the court that there are three supplementary affidavits to filed.

He is noted that he has not yet seen those affidavits. “I cannot deal with the submission unless I see the other three supplementary affidavits so that I can refer to them,” Boston stated.

Boston said that case brought against GECOM carries no weight since an election cannot be challenged unless the results have been declared, which has not occurred.

“I went there this morning with the view to make a point that this court has no jurisdiction to determine the issue at this intermediate stage. The election is still in process and it can only be challenged pursuant to article 163 of the constitution by way of a petition,” he pointed out to members of the media.

“There is no two-stage process. One, an intermediate stage if they are of the opinion that GECOM is not acting lawfully in the discharge of their function. Those are issues they can raise in an election petition after the results have been declared,” he underscored.

The parties will return to the High Court at 13:30hrs for the resumption of the case.