President of the Caribbean Court of Justice (CCJ) Sir Charles Dennis Byron informed participants of the Hague Convention Conference that the CCJ is in the final stages of developing programmes that would reduce the use of paper in judicial processes throughout the region.

“That (programmes being developed) would facilitate that process in domestic jurisdictions throughout the region, so it’s something that we would like to encourage acceptance to,” Sir Byron said on Friday. The three-day Hague conference on private International Law concluded on Friday. 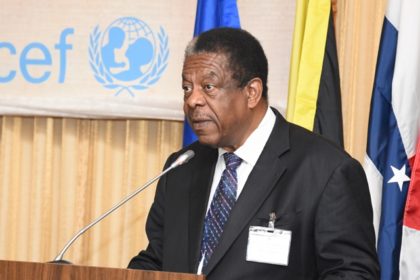 Sir Charles Dennis Byron, President of the Caribbean Court of Justice making his contribution at the Hague Convention Conference on International Law, Legal Cooperation and Commerce

He explained that the CCJ has tried to eliminate or reduce the use of paper in their judicial process by allowing all matters to be filed electronically. Additionally, all reports and orders made by the Court are issued electronically and the serving of documents is permitted electronically.

“In our situation, part of the reason for it had to do with expedition and cost, so for example, if we were receiving pleadings say from Belize, several copies would have to be made and sent to us by courier then you have the process of the registration, and it being returned by courier and then you’ll have the cost involved in arranging service… we have seen bills where the service of a document has cost litigants US$30 to 40,000 and the whole service process has taken a number of weeks including the process of courts,” Sir Byron explained.

He added by implementing those measures, the CCJ has eliminated the cost of filing and service, reducing it to zero and recued the time to five minutes, “So we think there are many advantages to be gained from pursuing this process.”

Former Home Affairs Minister of Guyana, Justice Stanley Moore said that Justice Byron illustrated and demonstrated one of the essential pre-requisites of a modern progressive judicial system.-“That is to say we are in the new electronic information age and therefore we need to make use of all the latest electronic devices. We have to keep up with modernity, we cannot be neo-luddites (used to describe those who are anti-technology). Therefore I believe that in the future, the discussion which we are now having will be a matter of history because the new norms will be the use and the availability of all the latest technological devices available to court systems throughout the world,” Justice Moore reasoned. 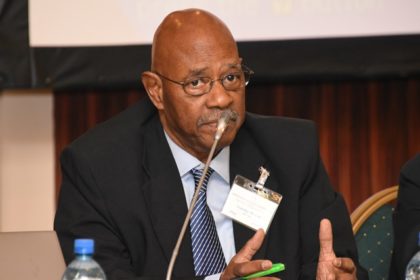 Participants were informed during that presentation that signing onto the 1965 Service Convention provides channels of transmission to be used when a judicial or extrajudicial document is to be transmitted from one State party to the Convention, to another State party for Service in the latter.