The National Community Development Council (NCDC) last evening held a closing ceremony for a one-month training workshop that targeted CDC councillors. The training was aimed at building capacity to identify problems affecting adolescents and youths and to design programmes to address them in their communities. 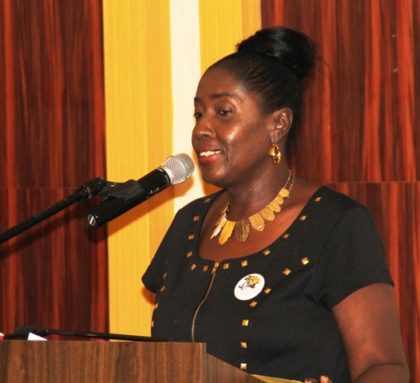 Minister within the Ministry of Communities, Valerie Adams-Patterson dueing brief remarks at the closing of the workshop at Pegasus, Georgetown.

The participants were able to increase their knowledge and skills in the areas of identification of social problems of adolescents and youth and casual factor, adolescent growth and development, adolescent needs and the challenges they encounter in their lives, adolescent sexual and reproductive health, and links to gender equality and gender based violence.

During brief remarks at the closing ceremony held at the Pegasus Hotel, Minister within the Ministry of Communities, Valerie Adams-Patterson urged the participants to focus on implementing change and getting results, since they are now empowered with the necessary skills, and are familiar with the issues affecting their respective communities.

“Many times we come up with workshops and people come up with plans, when you get back to your communities its put on the shelves. I trust that this will not happen, because the organisers of this workshop expect that with knowledge acquired there will be change of behaviour, attitude and change in all its form,” Minister Adams-Patterson said.

Minister within the Ministry of Communities, Valerie Adams-Patterson, United Nations Population Fund Regional Representative, Patrice La Fleur and National Director of the NCDC Eugene Gilbert, at the closing of the workshop at Pegasus, Georgetown.

Minister Adams-Patterson noted that there should be more interaction among the people of community, since they (the people) will be able to provide significant insights into the strengths and weaknesses of their community. She also encouraged the councillors to listen to the residents which will help them to identify areas which seem to be of common interest towards making change, and developing one shared vision.

Meanwhile, UNFPA’s Regional Representative Patrice La Fleur, spoke of the importance of youth development, noting that young people can play a major role towards the launching of an economic, social and cultural transformation, once they are healthy, educated and provided with viable options in life.

Youth’s remain at the centre of the HIV/AIDS epidemic in terms of prevalence of the infection, vulnerability, impact and potential for change; even though the world had agreed that young people have the human right to the information and means to protect themselves, La Fleur explained.

La Fleur pointed out that UNFPA is also concerned about adolescence pregnancy which robs girls of their childhood and often prevents them from completing their education. In fact, in Guyana, 2013 statistics reveal that the adolescent pregnancy percentage has been fluctuating from 20-22 percent below the age of 19 years and has remained constant at one percent under 15 years. There is a reported increase in adolescent pregnancy in the Hinterland Regions. 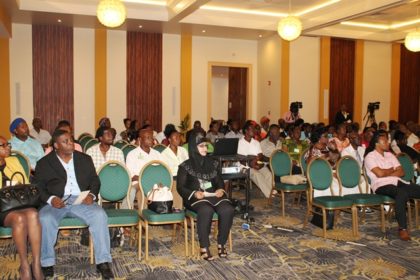 A section of the participants in the workshop

It is in this context, La Fleur said that that UNFPA collaborated with CARICOM to develop an integrated strategic framework for the reduction of teenage pregnancy in the Caribbean.

In Guyana, the   Ministry of Public Health in collaboration with UNICEF, UNFPA and PAHO will soon launch a situation analysis of all ten regions to ascertain the factors which contribute to girls becoming pregnant as early as 10 years of age.

La Feur also charged the participants to utilize their knowledge in addressing some of these issues affecting the youths in their communities.

The sessions were facilitated by a UNFPA Liaison Officer and supported by resource personnel sourced from the Ministries of Health, Education and Social Protection, Women Across Differences (including adolescent mothers,) and Help and Shelter.