Senior Response Officer of the Civil Defence Commission, Captain Salim October has disclosed that the agency is in discussions with Region Six  officals on the provision of support for a family whose roof was damaged following a freak storm on Wednesday.

October disclosed they are engaging the regional officals for an assessment of the damage and exploring the appropriate support required.

Heavy winds and rains at around 08:00hours on Wednesday morning ripped off zinc sheets from the roofs of several homes in Number 36 Village East Berbice-Corentyne leaving residents shaken. 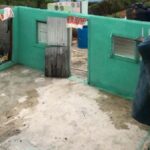 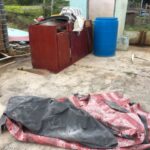 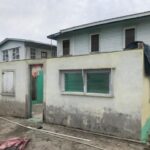 The Razak family suffered the brunt of the storm as their entire roof was ripped off and the kitchen situated in the lower flat inundated damaging their appliances and furniture. Several family members also suffered minor injuries as they tried to find safety.

Speaking with the media on Wednesday afternoon Dian Razak, 31, and a mother of two recalled she was in the hammock in the lower flat of their two-storey wooden and concrete building when her son ran in shouting.

The mother realised her 10-year-old was trying to show her something important and upon investigating saw some zinc sheets being ripped off her house.

She told her son to run as she picked up her two-year-old and ran to the front of the house where she covered her two children until the storm passed. However, while running to safety the 10-year-old was struck behind the neck and had to seek medical attention while his mother was struck on the leg.

During the ordeal, Mr. Razak, who was asleep was awoken by the noise and sought shelter with his family.

Meanwhile, at least three other homes in the street also lost zinc sheets from their roofs during the freak storm; which they described as a “circle breeze with rain”.  By Wednesday afternoon most of the affected families were able to repair their damaged roofs.