The Civil Defence Commission is advising persons to be wary of false information being circulated on social media platforms about the hamper distribution exercise.

The commission is aware of a social media post encouraging persons who are interested in receiving food hampers to make contact with Officer Owen Paul. This information is inaccurate. 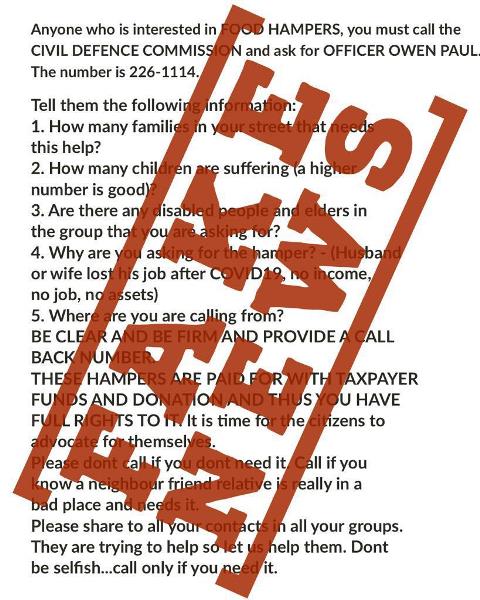 The CDC stated that it is aware that this is a difficult period for Guyanese and, as such, is working to ensure relief is provided to vulnerable persons across the country.

To date, the commission has distributed relief hampers to several communities in Region 3,4,5,6 and 10.

On Thursday, it was announced that the National COVID-19 Task Force (NTCF) had decided to revamp the distribution process as the current situation in the country is expected to last longer than anticipated.

This was disclosed by Director-General of the Ministry of the Presidency, Joseph Harmon. He noted that “the one-time distribution of items to some communities would not suffice.”

DG Harmon explained that a new system will have to be implemented which identifies vulnerable persons. Lists were being used previously to determine the vulnerable among the population.

The government official added that the COVID-19 pandemic had created a larger pool of vulnerable persons in society. These include people who lost their livelihoods because of the restrictions implemented to stop the spread of the virus.

The Government of Guyana continues to work assiduously to ensure the needs of Guyanese are met and catered for during this time.