Charting the course for a sustainable rice industry

Rice is a staple the world over. However it is more than that to the people of Guyana. From the earliest time, rice has been and continues to be one of the pillars of the Guyanese economy.

Rice cultivation has its beginnings in the 17th century and was introduced to Guyana during the period of African enslavement in the period of Dutch Colonialism.

Rice cultivation continued in Guyana and became a major economic venture for the descendants of Indians brought to the “New World” as indentured labourers. Today production in Guyana is wholly privately owned with government taking the role of facilitator. 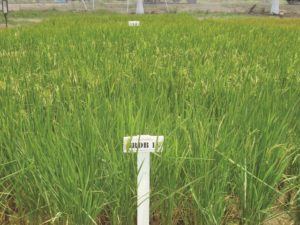 New rice variety being tested at the GRDB labs

Currently, almost 80,000 hectares (about 20,000 acres) of lands are under rice cultivation, some of which are government lands that are leased to farmers.

In the Abary/Berbice area where adequate drainage and irrigation systems are maintained by the MMA/ADA, land is leased at approximately $2500 per acre per year compared to an average cost of $20,000 per acre per crop from private land owners in other rice producing areas.

The MMA/ADA is a semi-autonomous agency under the Ministry of Agriculture,  governed by a Board of Directors. The Board is responsible for the formulation of policies for the efficient functioning and operations of the MMA/ADA.

Primary goals of the MMA/ADA are to manage, operate and maintain all drainage and irrigation works in Region No. 5, Mahaica/Berbice and to administer all State and Government lands for the benefit of farmers/residents and overall national development. Overall, the MMA/ADA supports nearly half of the national rice production.

The Guyana rice sector has seen consistent growth over the decades from a mere 80,000 tons in the 70’s to more than 600, 000 tons in 2015. A number of factors may be seen as contributing to the continued growth in rice production.

The increased acreage of land under rice cultivation may be attributed to investments in research to develop new high yielding varieties, contributing to the high yields farmers are enjoying, with direct benefit in unit cost of production and increased profitability. There has also been investment in education for farmers and other stakeholders in the rice sector. 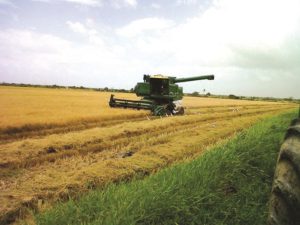 Rice being harvested with combine

The top seven main countries for the export of Guyana’s rice in 2014 were: Venezuela with 37.5% of total exports, followed by Panama with 11.83%, Jamaica with 10.03%, Portugal with 8.28%, Nicaragua with 7.02%, Holland with 5.08% and Trinidad and Tobago with 4.85%. The majority of Guyana’s rice was exported to Venezuela up until 2015 under the Petro Caribe Oil for Rice agreement between Venezuela and Caricom member countries.

While there are calls now for Guyana to try to regain the Venezuela market, there are three things that must be noted.

First, that the drop in oil prices from the time when the Petro-Caribe Agreement was inked could make the Venezuela market less attractive.

Secondly, the present government was in the opposition when Venezuela indicated that it would not be taking rice from Guyana. The then government did nothing to retain the Venezuela market neither did they inform the nation of what was happening and prepare farmers and millers.

Thirdly, the Venezuela market was about 35-40 per cent of Guyana rice exports. The Portugal market is now about 30 per cent.

RESPONSE TO CHANGES IN MARKET AND PRICES FOR RICE

To help chart the course for the sustainability of rice and ensure the survival and continued growth of the rice sector, a number of  initiatives have been undertaken by the present government through the Ministry of Agriculture and other departments of the state. Among the interventions taken by the government are

Rice will continue to be a pillar of the local economy. Back in July last year, President Granger at a National Conference of Rice farmers and millers had expressed confidence in the future of rice.