At the handing over ceremony PAHO/WHO’s representative to Guyana, Dr. William Adu-Krow explained the functions of the medical equipment as he presented them to Public Health Minister, Dr George Norton.

“These are used to monitor the growth of the unborn child… We are also donating six neonatal resuscitation machines so that if a child is born and the child is not breathing and there is something wrong with the child we use that to resuscitate,” Dr. Adu- Krow explained. 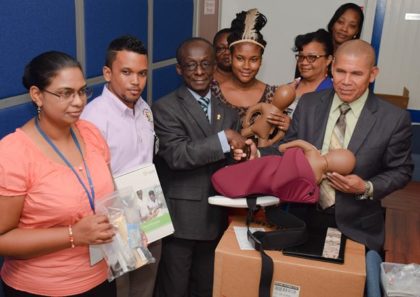 Among the equipment donated were actual birth simulators that will be able to give midwives and doctors first-hand knowledge on child birth before actually going into the delivery room.

“We also have what we call mama Natalie. Mama Natalie is a child birth simulator where you can see the baby coming out of the pelvic opening; you will then use the models to manoeuvre how you want to get the baby out.. it even has artificial blood as well so that you know that you are not allowed to lose more than 150ml of blood during labour.  If it is more than that, you will have to take action,”Dr. Adu-Krow further  explained.

Minister Norton, in receiving the donation said, “I warmly thank PAHO/WHO for its donation of obstetrics equipment to the maternal and child health department of the Public Health Ministry. The equipment being donated will help in reducing maternal mortality and morbidity in Guyana which is a major focus for my ministry.”

He added, “Contributions like this can directly reduce the mortality rate. The Government of Guyana shares the widely accepted notion that the quality of maternal health care in our country is indicative of the quality of the overall health system.”

PAHO/WHO has made additional contributions the Ministry of Public Health Dr. Adu-Krow stated. “I also made mention to the Honourable Minister that we are doing a lot more than this, we have donated some refrigerators for vaccination and we have also given two ATVs to Region One and another one to Region Eight. PAHO/WHO has remained supportive of its member states and we are continuing cooperation and interaction.”

The PAHO/WHO country office is responsible for providing technical cooperation, which facilitates activities aimed at improving health conditions in Guyana.