The Region Nine Regional Administration and Conservation International (CI) Guyana, signed a Memorandum of Co-operation that will see the two entities partnering to craft and implement the region’s Plan of Action for Regional Development (PARD). 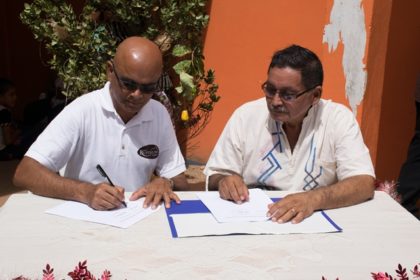 The signing ceremony was held on November 16 at the region’s annual Christmas Village activity, at the Community center ground in Lethem, Region Nine.

CI’s Vice President, David Singh explained that the signing formalises the long-standing relationship between CI and the people of the Rupununi, and cements the strong connection that the people have with the eco-system that makes the area so special.

“When you combine the rich culture and heritage of the Rupununi region, alongside its vast intact eco-systems, you have the very basis in which you can have sustainable development, in which the future of our country can be realised. CI’s work is built around helping people to care for nature and what better place to do that, than a place like the Rupununi region”, Singh said.

“However, it cannot stop there”, Singh noted, “If we only work towards the sustainable development of the Rupununi and not at the same time focus on the overall development of Guyana, along with a low carbon green development path, we will actually be ‘shooting ourselves in the leg’ as such.” He emphasised that the objective must be about capturing the values of the people and the natural heritage, and combining the two, so that the future of the nation’s children can be one that is sustainable.

He also expressed pleasure in once again partnering with the region and the government of Guyana for the country’s overall development.

Regional Chairman, Brian Allicock explained that over the past year, CI has been providing technical assistance and finance to the Region Nine, for stakeholders’ consultations and involvement in crafting of the PARD.

Allicock said that between 2016 to 2017, the team managed to visit several communities, thereby allowing the regional administration to include most of the projects requested by the villages in its 2018 Budget. He expressed gratitude to CI for its continued support both technically and financially.

Meanwhile, CI’s Field Implementation Director, Rene Edwards noted that the Rupununi has been providing sterling leadership as it relates to sustainable development. He said that this formalisation is appropriate because it allows CI to provide further support, finalise and implement the PARD process.

All ten administrative regions are required to craft Plans of Action for Regional Development (PARD), as mandated by President David Granger and the Ministry of Communities.

The PARDs will outline a 10-year developmental plan for the regions, that includes a holistic and multi-sectoral approach. This means that there will be strategic plans for sectors including health, education, agriculture, infrastructure, nature and the environment, culture, and traditions.