Mayor of Georgetown, His Worship Ubraj Narine, on Friday, led a team of diplomats on tour throughout the capital city. The outing took the foreign dignitaries to locations such as the Industrial Site Day Care Centre, Meadow Bank sluice door, Stabroek Market Wharf, City Constabulary Training Complex and the Municipal Abattoir.

Accompanied by some of his councillors, Mayor Narine outlined the purpose of the trip. “I organised this little tour so that they can see actually what is happening, what the Council manages, and how we go about to managing it.”

On the sidelines, the Department of Public Information (DPI) interviewed a few diplomats to get feedback on the activity. “It allows us to visit the sites and see how we can collaborate to improve services, to improve systems and have them organised. I believe that will prove helpful to the city,” noted Country Representative of the Organisation of American States (OAS) Jean-Ricot Dormeus, who praised the tour as, “a great initiative.”. 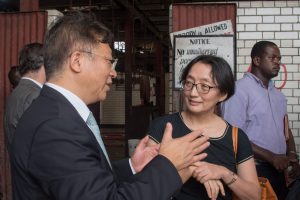 “It sets the tone. So, we will see what we can do together,” the OAS Representative concluded.

Meanwhile, Brazilian Ambassador to Guyana, HE Lineu Pupo de Paula was optimistic on the way forward for the city. The diplomat indicated, “I think we can help. So, after, we are going to have a meeting with the Mayor and see what we can do.”

After the diplomatic tour, Mayor Narine stated, “I was able to touch on the major issues and major problems we are facing in the city.” According to the Mayor, it is hoped that the tour will facilitate deepened cooperation between the M&CC and the diplomatic community.

“There would be a follow-up meeting with the diplomatic corps at which I will able to get a brief-what will be the way forward.”