Coalition focusing on better life, unity for all – President Granger

His Excellency President David Granger today said his desire to provide “a better life” for all Guyanese is driven by an intense love for his homeland.

Appearing as a guest on the NCN’s Vybz 100.1 FM, the Head of State said: “Most Guyanese, I meet, would like a better life. They would like to be comfortable. Young men and women want to get married. They want good housing, good salaries and that is what I intend to deliver. It is not a question of ideology but it is a question of quality of life and that is what my government has been putting a lot of attention on.” 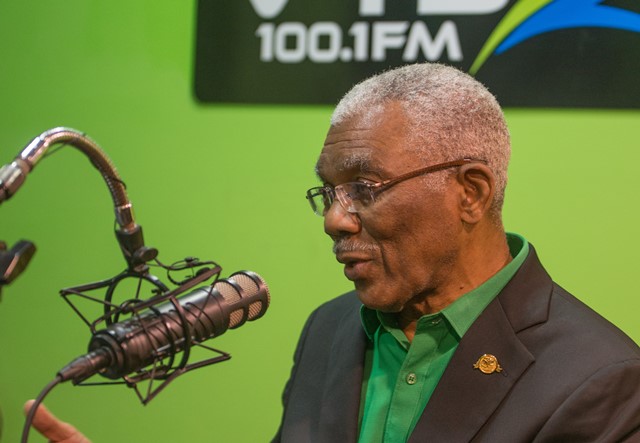 His excellency President David Granger during his appearance on NCN’s Vybz 100.1 FM.

The Coalition administration, the President reminded has moved to ensure that social services are provided so that young people, in particular, can pursue their economic interests “knowing they’ll be safe, that they will earn a good salary, if they or their families fall ill they will receive the necessary medical attention.”

He underscored that public services must be delivered to all sections of the population so that we have greater equality in the country.

When asked about the attempts by some to put a rift between the various groups in the citizenry, President Granger noted that because of the issue’s sensitive nature, and its importance, it must be addressed.

He explained that this was the main reason behind the creation of the Department of Social Cohesion, he explained, “to address this very issue.”

President Granger noted that, in other countries, differences in religion and beliefs result in disorder. However, our religions function side by side… Guyana has come a far way.”

The creation of State House’s Baridi Benab, the President said, reflects his office’s efforts to forge unity, “You will see Hindu’s celebrating Phagwa Day in State House. At Diwali, you’re going to see two rows of diyas coming from Main Street into State House. You’ll see Muslim ceremonies. You’ll see Christian ceremonies. We are much more tolerant of each other. We are very respectful.”

Collaboration at the governmental level is key to a country’s growth and development the Head of State said.  “There must a genuine collective understating that we are all working for the common good.”