As the Guyana Election Commission (GECOM) moves ahead with Day 9 of the national recount of ballots cast in the cast in the March 2 General and Regional Elections, Minister of Public Infrastructure Hon. David Patterson announced that the APNU-AFC coalition intends to release the tabulations it has made.

The minister disclosed that the tabulations will be released on a District by District basis to the public after the election body has completed recounts and tabulations for the respective Districts. 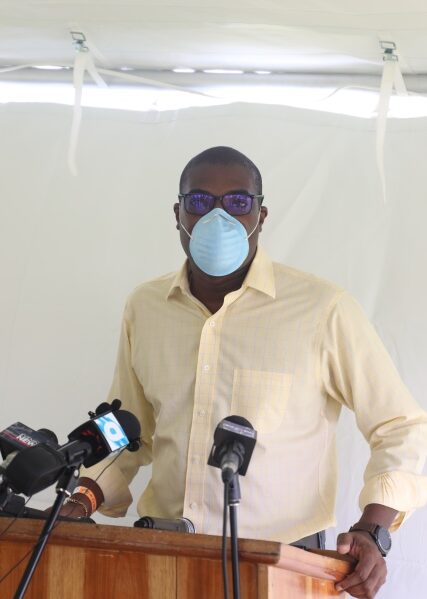 Minister of Public Infrastructure Hon. David Patterson speaking to the media on day 9 of the national recount

In a media briefing at the Arthur Chung Conference Centre on Thursday, Minister Patterson also put to rest calls for the Coalition to release Statements of Polls (SOPs) it has in its possession, noting that the political party desires to see GECOM continue its work.

“This exercise is not a question of comparison. In my opinion, it’s a question of determining a winner and a next government […] We do not want anything to disturb this process,” he stated.

The Public Infrastructure Minister reminded the public it was President David Granger who brokered an agreement with the Leader of the Opposition Bharrat Jagdeo for there to be a recount of ballots cast in all administrative regions and that the Coalition intends to see the process take its course.

While maintaining the Coalition’s objections to discrepancies unearthed during the recount process thus far, that will be part of the observation report, Minister Patterson said the APNU+AFC intends to ask GECOM how it plans to deal with the anomalies.

For day 9 of the recount, GECOM is expected to process ballots from District 5 as the recount for District 1 ballots concludes terminates.