Minister Ramjattan’s come as Guyana maintained its TIP Tier 1 status in the US Department of State Annual Global TIP 2019 Report for a third straight year. Guyana leads several Caribbean states in this regard with only the Bahamas holding Tier 1 status. 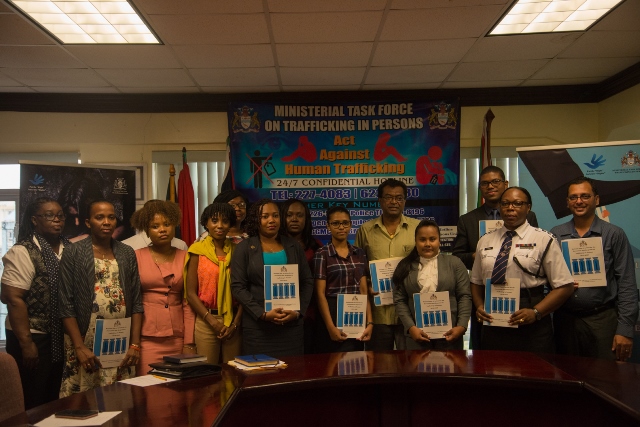 Minister of Public Security and Chairman of the Ministerial Task Force on Trafficking in Persons, Khemraj Ramjattan with members of the Task Force at the launch of the National Plan of Action 2019-2020.

Antigua and Barbuda, Haiti, Jamaica, St. Lucia, St. Maarten, St. Vincent and the Grenadines, Suriname and Trinidad and Tobago have Tier 2 status while Barbados and Belize were placed in Tier 3.

The Ministry of Social Protection, the Guyana Police Force, Food for the Poor among others have played critical roles in trying to end TIP.

“I encourage the general public to continue its improved reporting on suspected occurrences of the crime, utilising the following TIP Hotline numbers – 227-4083/623-5030… the Ministerial Task Force on Trafficking in Persons and its partners remain committed to working together to effectively combat the crime of trafficking in persons and hold traffickers accountable” the Public Security Minister stated.

Minister Ramjattan made it clear that Guyana will continue to implement the recommendations put forward by the report aimed at eradicating TIP. The suggestions in the last report bore fruit when they were applied to the 2017-2018 Plan of Action. Seventeen charges along with three convictions for persons involved in TIP were some of the successes yielded from the Plan of Action.

Additionally, it was highlighted by the Minister that the Ministry of Social Protection’s Counter TIP Unit has established a Victim Care Facility outside the capital. This unit also caters for both male and female TIP victims and houses a safe space for children. Further, the Ministerial Task Force on Trafficking revealed its 2019-2020 Plan of Action for the prevention and response to TIP.

This time around, the Minister maintained that the same will be done. “The Report did include a number of recommendations for improvement. The Government of Guyana intends to heed these as it has done for recommendations in past reports.”