─ “We are mandated to and will provide the good life” – Min. Harmon

─ “We have to work in unity to build our community” – Min. Allicock

Residents in the Deep South Rupununi, Region 9 will no longer be affected by droughts following the drilling of eight wells in eight communities in the Upper Takutu-Upper Essequibo area.

The wells, located in Aishalton, Chukrikednau, Karaudarnau, Achiwuib, Awarawaunau, Marunranau, Shea and Baisahidrum, were officially handed over to the communities today. They will provide the residents with access to large quantities of water at a good temperature.

Delivering the feature address at the handover ceremony in Aishalton, Minister of Foreign Affairs, Carl Greenidge commended the Brazilian and Guyanese team for an outstanding job in completing the wells on schedule, in less than two months.

“Guyana is a country susceptible and exposed to droughts and floods and this area is no exception to that… This is a continuous process you have to ensure that they [wells] continue to work and we will continue to ensure that the technology to reduce the effect of drought in Region 9 is an initiative that will bear fruit,” Minister Greenidge said.

He noted that the project comes at an opportune time when Guyana and Brazil are celebrating 50 years of diplomatic relations. He stated that maintaining the diplomatic ties required collaboration, which is evident at today’s event. 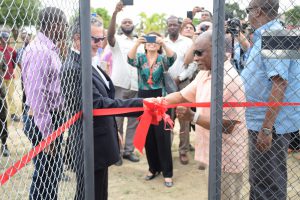 Minister of Foreign Affairs, Carl Greenidge [right] and Ambassador of Brazil to Guyana, Lineu Pupo de Paula cut the ribbon to officially hand over the wells to the communities 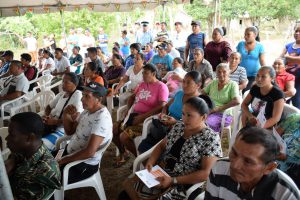 A section of the gathering at the handover ceremony 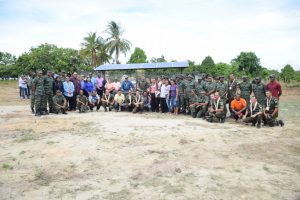 The first batch from the Brazilian Army arrived in September and drilling of the wells commenced on October 1.

Minister of State, Joseph Harmon noted that while the project initially faced challenges it was successfully completed on time due to interagency cooperation. The minister reaffirmed that this project is a reflection of government’s commitment towards providing all citizens with a “good life” regardless of where they live.

“Whatever resources are available to the state, in collaboration with the Regional Democratic Councils (RDC), we are mandated to and will provide the good life. The matter of the drought has always been at the forefront of CDC and from the onset, all parties involved were committed to the mission of executing it,” Minister Harmon said.

He thanked GDF and the Brazilian army and all parties involved for their outstanding performance for a great job done, particularly the Ministry of Public Infrastructure and contractor for excellent work on the roads to provide access to the communities.

Meanwhile, Minister responsible for Indigenous Peoples’ Affairs, Sydney Allicock charged the residents to take full responsibility for the protection and management of the new wells.

“Water is life and the Government is serious about supporting citizens in realising the good life. It cannot be done alone there must be a partnership like that demonstrated here today and we have to work in unity to build our community,” he told the gathering.

This venture stems from a complementary agreement to the 1982 Technical Cooperation Agreement made between the governments of Guyana and Brazil, in December 2017 to addresses the issues of water scarcity and climate resilience in the Deep South.