The Ministry of Education, teachers, parents and the Board of Governors of the Brickdam Secondary School have agreed on a stop gap solution for the school. 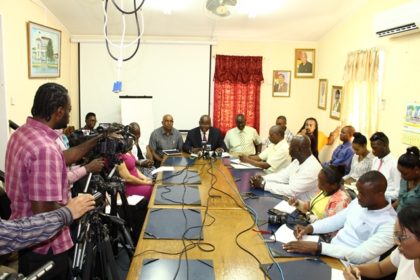 Sam also disclosed that the Ministry has already begun the process of acquiring land to construct a school to house both the Brickdam Secondary and Central High Schools, and that rehabilitation work would have commenced on Saturday June 11 at the Secondary School.

The stop gap solution was arrived at this morning following further consultation with the Board of Governors, the executives of the Parent Teachers Association (PTA) and teachers of the school, the CEO said.

The CEO also provided clarification on the issues leading up to the sit-in by the teachers and the earlier decision of the ministry to close the school.

He explained that Minister of Education, Dr. Rupert Roopnaraine, on June 9, 2016 received a letter from the teachers of Brickdam Secondary citing some issues and requesting an audience.

The CEO said that he visited the school and engaged the teachers, pointing out that the teachers had not yet formally engaged the Ministry and that such extreme action ran contrary to established procedure for resolving matters  affecting them..

Sam said that the teachers were urged to organise themselves to facilitate an engagement to arrive at an amicable solution.

The Permanent Secretary of the Ministry, the CEO, the Advisor to the Minister along with the Chief Buildings Engineer and officers of the Georgetown Department of Education, met with the teachers of the school and the Guyana Teachers Union (GTU) representatives on the afternoon of June 10, to address the issues.

The CEO said that coming out of that meeting was an agreement that, the more immediate issues raised would be addressed by the engineer over the weekend; the ministry would devise a plan of action over the next few days for the relocation of the school at the beginning of the new academic year while the more long-term solution was being addressed; and teachers were asked to complete the term at the current location allowing adequate time for the new plan to be instituted.

The rehabilitation works commenced on June 11 at the school and the Head teacher engaged the Ministry on the morning of June13 to devise strategies to facilitate the completion of the term at the location, Sam said.

Unfortunately, the teachers failed to honor the agreement arrived at and continued their industrial action refusing to teach until they were placed in a completely new environment.

Sam said that this was what forced the Ministry to devise the other plan to facilitate the students completing their end of year assessments while meeting the demands of the teachers. Teachers were assigned to other schools in Georgetown while students were assigned to the following A Grade Schools: North Georgetown Secondary, Christ Church Secondary and North Ruimveldt Multilateral, as a temporary measure until a permanent solution could be devised.

The CEO also defended the Ministry’s initial decision to move the teachers. He explained that the Ministry attempted to put in place a measure to facilitate the students completing their work. “With every passing day, another day was lost in relation to the students being able to complete their end of year assessment,” the CEO said.

He pointed out that at this stage in the academic year, where students are actually fully prepared and are in examination mode, “to actually not have that happen is a disservice to them and really causes more problems than one can possible imagine and our attempt was to find a more immediate solution to the problem,” he said.

“The teachers basically gave us little choice in the matter. They said that they refuse to teach in the buildings and given that reality, one can appreciate that the ministry had little option in relation to what they could do. Everything led to actually placing teachers outside of that building,” Sam added.

He pointed out that the ministry is convinced that the measures put in place thus far, regarding Brickdam Secondary, are in the interest and safety of the teachers and students alike. He said that the Ministry will continue to monitor the situation to ensure that the rehabilitated works to the school are completed as necessary and any potential for any incidents are minimised.

According to the CEO, the Ministry has been aware for some time now that both Brickdam and Central High Schools needed to be relocated and have been actively involved in the process of facilitating that.

He said that from the feedback received from the Ministry’s Building Units, many of the issues at these two schools are structural and cannot be resolved from any rehabilitation action and, whilst the Ministry has been working in the short term to make the school functional, it has also been working towards the ultimate solution of relocating both schools.