The process of consultation to address the long-standing land issues in Santa Rosa, Moruca sub-District, Region One, has started. Minister of Indigenous Peoples’ Affairs, Sydney Allicock and a team of officials visited the area on Wednesday. 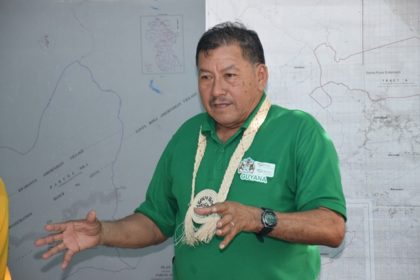 Minister of Indigenous Peoples’ Affairs, Sydney Allicock during his address.

During the meeting which was held at the Kumaka Guest House, Sharon Atkinson, a resident, said that the issue has been ongoing for the past decade and was never resolved despite numerous complaints. She explained that when that village was demarcated back in 2006, it was observed that the map and the description of the document did not correspond.

Santa Rosa overlaps with a number of villages and a protected area.  Atkinson noted that the overlapping which occurred during the demarcation process was no fault of theirs since they were never consulted during the process.

Atkinson maintains that the demarcation was done based on the land title of the 1976 description, and therefore, “our land is absolute and forever.” 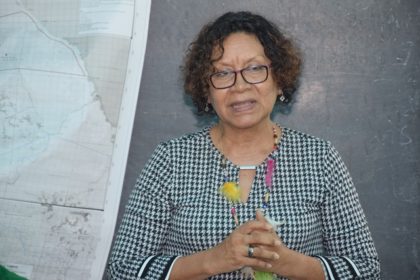 Minister within the Ministry of Indigenous Peoples Affairs, Valerie Garrido-Lowe during brief remarks.

The village has been actively trying to resolve the issues at the local level and residents are calling on a major participant – the Land and Surveys Commission – to be part of the process.  An investigative team has been on the ground to identify the area boundaries.

However, the villagers believe that in moving forward, there need to be more formal discussions. To that end, the Village Council will be drafting a Terms of Reference (TOR) to be submitted to the ministry. The TOR will provide guidelines as to the way forward.

There will also be the establishment of the Moruca Sub-Region District Council by the end of 2017, to oversee the process.

Minister Allicock during his remarks explained that the issue of land in Santa Rosa has been ongoing for over a decade. From the beginning, the consultative process was not executed, hence that process has now commenced, in order to correct the error made years ago, he said.

He was in agreement with the idea of a TOR being crafted and commended the residents for their active involvement in the issue. 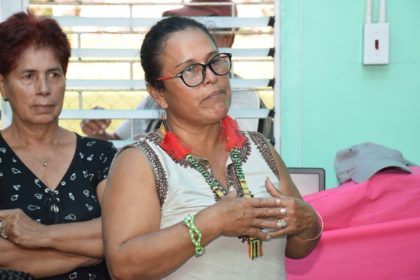 Sharon Atkinson, a resident of Santa Rosa raising her concern.

The minister also urged the village leaders to implement their Village Improvement Plan (VIP) to better manage their resources.

The National Toshaos Council Chairman, Joel Fredericks encouraged the village leaders to meet with their people and discuss whether they want the issue to be solved at the Land Commission of Inquiry (COI), solve it themselves of the reference mechanism.

Meanwhile, Minister within the Ministry of Indigenous People’s Affairs, Valerie Garrido-Lowe also reaffirmed government’s commitment to ensuring land issues are resolved. She reminded that the issues are a decade old and it will take a process that includes a series of consultation. 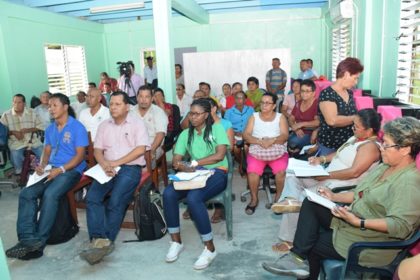 Toshaos and Councillors at the meeting at the Kumaka Guest House, Region One. 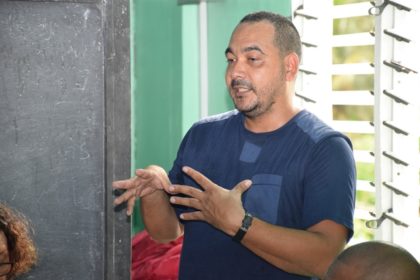