The Ministry of Public Infrastructure has added two more communities to its new Citizens Organised for the Restoration of the Environment (CORE) initiative.

Over the last two days, CORE Coordinator Charlene Garroway launched groups at Kwakwani and Ituni, Region 10. The groups were also provided with equipment donated by the Ministry. 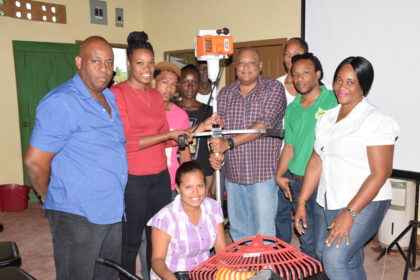 CORE is a new initiative of the Ministry of Public Infrastructure which falls under the Special Projects Unit and seeks to empower and better communities through the formation of community groups which work to beautify the environment.

Gravesande, while introducing the Ituni CORE group to residents, encouraged them  to fully support the initiative. “I want you to support and embrace them in every way to develop your community and have your community spick and span,” she said.

CORE workers work on behalf of the Ministry of Public Infrastructure to provide environmental upgrade, drainage, sanitation improvement, and general aesthetical enhancements of the work being executed by the Special Projects Unit of the Ministry. Works also include weeding, cleaning, drainage clearing, and general beautification.

Linden , Region 10 and Region Three, West Demerara  already have functioning CORE groups. The aim is to mobilise groups across the country.