A cheque valuing $5M was today presented to the Minister within the Ministry of Education, Hon. Nicolette Henry by Courts Guyana the sponsors of the two events at a simple but symbolic ceremony at the Racquet Centre, on Woolford Avenue.

Chief Executive Officer of the Women and Gender Equality Commission, Diana Swan-Lawrence noted that the Commission is pleased with the support being given by the Ministry and Courts Guyana in hosting the event which is scheduled for September.

Ms. Swan-Lawrence explained that the exhibition is a part of the Commission’s mandate of educating the public about the women who have made a significant contribution towards Guyana’s development. In this regard, the exhibition will highlight 50 outstanding Guyanese women in aiding national development. 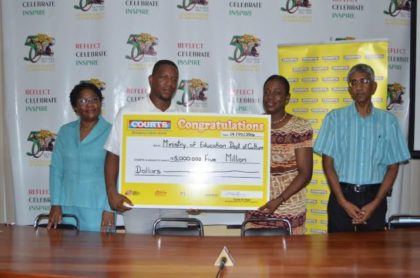 Mr. Hosein noted that these persons would have laid the foundation blocks for Guyana. He expressed his hope that more projects like this will be done since there are more than 50 people who contributed in a tangible way to Guyana’s development. It is anticipated that the publications will be ready in two months’ time.

Pernell Cummings from Courts Guyana, noted that the company is pleased to sponsor these projects in recognition of Guyana’s rich past and future, hence it is important to acknowledge their efforts.

(*Please note that Courts Guyana is co-sponsor of the Iconic Women Exhibition in association with the Women and Gender Equality Commission.)