Cricket- not just a game for gentlemen

While eighteen-year-old Elyna Abrahams looks like a typical teen her dream is to become a professional cricketer and “be out there like Chris Gayle.”

Elyna who is from the village of Lake Capoey, represents the region and recently participated in the 2019 Guyana Cricket Board (GCB) Senior Female Inter-County Tournament Under- 19 in T20.

She told DPI, “My dream is to further my cricket career … make my community and region proud…my dream is to go higher and this can be achieved through my passion and dedication for the game and support of others and my faith in Christ.” 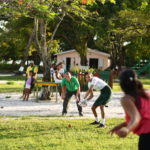 Elyna Abrahams bowls to Nafeeza Hendricks who prepares to swing at the ball. Keeping a close eye is Minister Norton who is wicket keeping 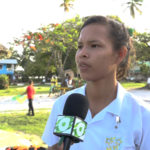 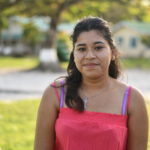 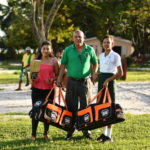 During a recent visit to the community, Minister of Social Cohesion the Hon. Dr. George Norton donated gear to Elyna and another aspiring female cricketer, 16-year-old Nafeeza Hendricks.

Elyna thanked Minister Norton for the donation. “I am grateful for this donation. We have a senior cricket competition coming up soon and I did not have my own l gear. Now I do, so I can now slay the competition,” she confidently added.

Her teammate Nafaeeza has been living and breathing cricket since Grade Four. ‘I started to play for some time now with a goal in mind to represent Guyana and I have been training really hard to do exactly that. Because of that, I have been representing the region in the Heritage Games at the Everest Club for three years. Last year was the first year I got to play hardball cricket for Essequibo,” she explained.

According to Minister Norton, the decision to donate the gear to the players followed a discussion he had with them during a community outreach. It was important for him to encourage their participation as it is part of the department’s mission to promote gender equality in sport.