Georgetown, Guyana – (July 7, 2016) The review of the Caribbean Community’s (CARICOM) Single Market Economy (CSME)/ Free movement of labour, security and the budding relationship between Chile and the regional body were among the top priorities at the just concluded Thirty Seventh Regular Meeting of the Conference of the Heads of Government of the Caribbean Community, which was held in Georgetown, Guyana from July 4-6, 2016.

From right: Chairman of the Conference of the Heads of Government of the Caribbean Community and Prime Minister of Dominica, Hon. Roosevelt Skerrit and co-host and President of Guyana, His Excellency Brigadier David Granger during the closing Press Conference, which was held last evening at the Pegasus Hotel.

Coming out of the meeting, it is expected that a review of the CSME and free movement mechanism will be undertaken as well as a multimedia campaign to educate Caribbean nationals on the workings of the movement while in in the security sector an arrest warrant treaty is expected to be signed later this year by all member states to boost regional security.

These outcomes were announced by Chairman of the Conference of the Heads of Government of CARICOM, Prime Minister of Dominica, Hon. Roosevelt Skerrit at a press conference, last evening, at the Pegasus Hotel. President David Granger, co-host of the Meeting and Secretary-General of CARICOM, Ambassador Irwin LaRocque, also participated in that press conference.

Prime Minister Skerrit said that the matter of the CSME and free movement engaged the attention of all of the Heads of Government, during their deliberations. A decision he said, was taken for a comprehensive review to be undertaken and the findings will be considered at the next Inter-Sessional Meeting of the Heads of Government, which will take place next February in Guyana. 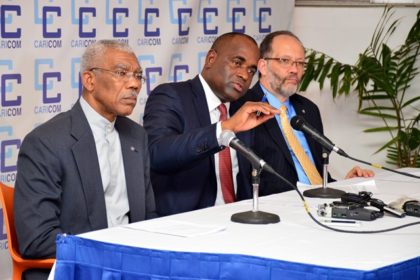 “That is in an effort to take the process forward and not to change any of the decisions we have taken thus far. It will strengthen the integration process. In the meantime, we are going to intensify an educational media campaign in member states, aimed at all levels of society. The Programme will highlight the benefits and provisions of the CSME… We are fully committed to implementing the CSME regime as we are fully convinced that it’s our only option to achieving sustainable growth and development in the Caribbean region,” Prime Minister Skerrit said.

He noted that with respect to free movement, among the more significant issues, were the addressing of the concerns of citizens in taking advantage of the free movement regime. Guyanese have over the years complained of the treatment meted out to them during this travels to various CARICOM states, while Jamaica is currently working to resolve their issues in that regard with Trinidad and Tobago.

“Even though the overwhelming majority of citizens are moving through the community without hindrance, we do have instances of denial of entry at our ports and this is a matter, we believe, has to be addressed and addressed urgently as we are aware of the negative views which surface when these instances occur,” the Chairman of CARICOM said.

Prime Minister of Jamaica, Hon. Andrew Holness, during conference press conference held earlier in the evening, also spoke on the issue, noting that it is back on the agenda for CARICOM and it must be addressed. He has committed to engaging the Prime Minister of Trinidad and Tobago to begin the process of rectifying this, especially for his countrymen.

In the meantime, the Community has granted its approval for a review of the CARICOM’s Crime and Security Strategy (CCSS) to ensure that there is coordination between national security plans and the strategy as well as the signing of an arrest warrant treaty, which will see perpetrators of crime being arrested in any of the CARICOM states and deported back to their homeland to face prosecution. 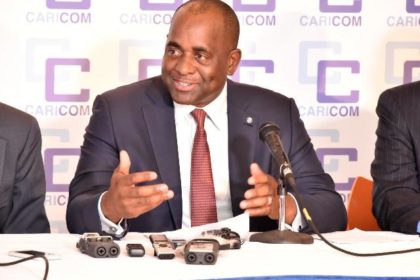 Chairman of the Conference of the Heads of Government of the Caribbean Community and Prime Minister of Dominica, Hon. Roosevelt Skerrit

“Implementation Agency for Crime and Security (IMPACTS) continue to play an important role in our effort to address crime and security… We agreed that urgent steps should be taken for completion of critical regional security agreements. We’re placed as a priority on the completion of CARICOM, arrests warrant treaty. This is a matter we have been discussing for some time now and I believe that Heads are resolved to having this particular agreement entered into before the end of 2016. This, we believe, will enhance security of our region and is a matter in which Heads are fully in support of,” Prime Minister Skerrit told media operatives.

The budding relations between Guyana, Chile and the Caribbean Community were also discussed at the Meeting since Chilean President; Her Excellency Michelle Bachelet attended the Conference to discuss areas of cooperation and trade among the parties.

During those meetings, the Chilean President met with President David Granger, who has committed to travelling to the country in the later part of this year, to concretise several areas of possible cooperation.

The press conference in progress at the close of the Thirty Seventh Regular Meeting of the Conference of the Heads of Government of the Caribbean Community.

“We agreed to heighten political arrangements and that technical cooperation should be expanded through climate change, Sustainable Development Goals and trade cooperation,” co-host of the Conference, President David Granger said.

Guyana will assume chairmanship of the Community in January and will host the Thirty Eight Regular Meeting of the Conference of the Heads of Government.