─ request has been taken into consideration, and all efforts will be made to support that country’s migratory flow – Min. Felix

Following a second meeting on migration matters between the governments of Guyana and Cuba, a request was made for the government to relook the non-visa requirement for Cuban Nationals.

The two countries met for the first time on the matter in 2016. 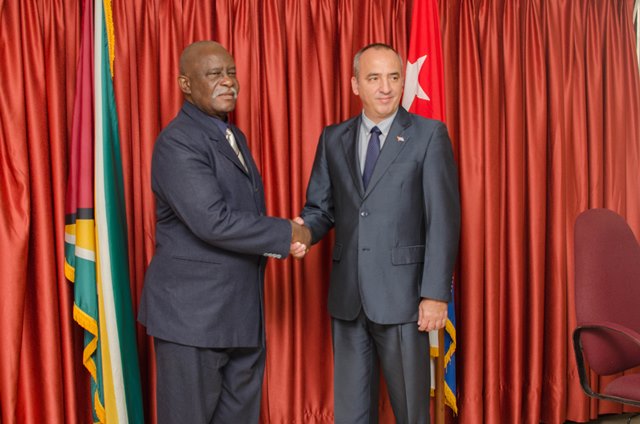 A firm handshake between Minister of Citizenship, Winston Felix and Ernesto Soberon Guzman, Director of the Division of Consular Affairs and Cuban Resident Abroad, following two days of meeting to discuss migration matters.

The Cuban government has asked Guyana to abolish the non-visa requirement for Cuban Nationals. This essentially means, if this request is agreed to, and steps put in place, Cubans wishing to come to Guyana would need a visa.

To date, only Venezuela and Russian nationals require a visa to enter Guyana.

According to Ernesto Soberon Guzman, Director of the Division of Consular Affairs and Cuban Resident Abroad, his country is doing this, not to stop Cubans from coming to Guyana, but instead, to ensure a smooth and legal flow of traffic. Adding that this measure is being requested to protect Cuban nationals as well.

“Our objective is to get a regular and orderly flow of migrants between our two countries,” stated Director Guzman.

In the meantime, Minister of Citizenship, Winston Felix said Cuba’s request has been taken into consideration, and all efforts will be made to support that country’s migratory flow.

He said Cuba has also requested that government share information relating to applications for refugee status by Cuban nationals, as well as travel information for Cubans passing through Guyana.

“This discussion commenced in 2016 when I visited Cuba, so the two days of discussion here must be seen as a continuation… matters discussed had to do with the need to abolish the non-visa requirements for Cubans arriving in Guyana… the Cuban government made the request,” Minister Felix noted, adding that this matter is under discussion.

The minister assured that Cubans will not be singled out or mistreated in any way.

“They will be treated well and welcomed like all other Caribbean nationals coming to Guyana.”