The Ministry of Education, Department of Culture Youth and Sport today held an Emancipation  celebration to mark Guyana’s 178 th year as an emancipated nation.

The cultural event was held at the Ministry’s compound on Main Street, Georgetown which saw many persons decked out in their colourful African outfits and accessories. The event was filled with many cultural activities such as African drumming, dancing, singing and prayers.

Minister within the Ministry of Education, Nicolette Henry reminded the gathering that freedom was not easily achieved. The Minister noted that the enslaved Africans’ early deliberations were the product of a collective effort. 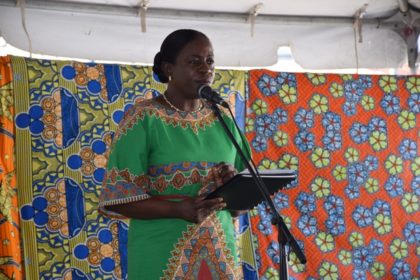 Minister within the Ministry of Education Department of Culture, Youth and Sport making brief remarks at the Emancipation Day Celebrations event

Minister Henry said that as Guyanese reflect on emancipation they should take away key lessons, one being unity. “Once enslavement was abolished the ex-slaves pooled their resources to purchase villages because they recognised that one person could not do it alone.”

Minister Henry said that Guyanese must learn to become entrepreneurs as the enslaved did when they became freed men and women. The freed slaves, according to the Minister, realised that they could gain wealth on their own.

The Minister encouraged citizens to, “believe in ourselves to go after our own dreams and pursue it until we reach our full potential.” 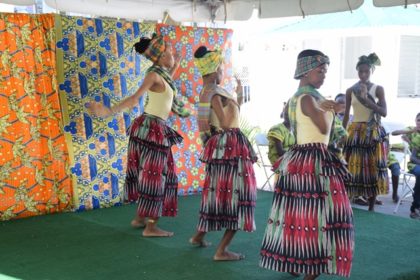 The Minister said the final lesson to take away from emancipation is to work hard and ‘believe in what you believe’, adding that good things do not come easily. “It takes a lot of hard work, it takes patience, commitment, resilience and many of those qualities to achieve good outcomes,” the Minister noted.

Additionally, Minister Henry said, “we should commit ourselves to a collective resolve to consolidate the gains of freedom, to strengthen our bond in the future and together create a society in which all are equal.” 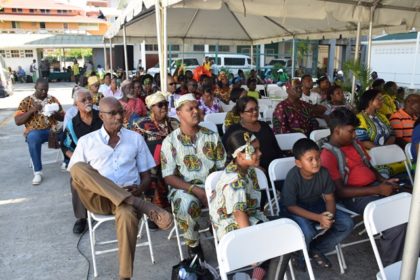 A section of the crowd at the Emancipation Day Celebrations event

Additionally, several villages in Regions 2, 3, 4, 5, 6 and 10 received monetary support for  their emancipation activities.

One hundred and seventy eight years ago on August 1, enslaved Africans gained emancipation from their British Masters. On Monday, August 1, 2016, Guyanese will be celebrating Emancipation Day.