Georgetown, Guyana, February 18, 2020. –  The community of Dagg Point, Agatash, Region Seven (7) will receive electricity soon, as the Guyana Power and Light Incorporated (GPL) expedite efforts to power the community. This move is in keeping with one of GPL’s quality policy of ensuring that all consumers are supplied with reliable electricity.

The small community, which has over 200 residents, never had electricity, forcing residents to resort to the use of kerosene lamps and/or generators, which are costly to operate and maintain. 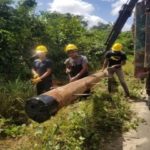 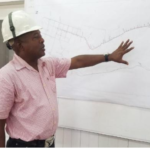 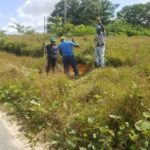 A section of the network bearing erected poles.

GPL’s Senior Network Technician in Bartica, Carl Abrams posited that all the necessary primary structures to facilitate the works are already in place. Mr. Abram said “the residents there are very scattered geographically so three power lines are necessary. Two transformers have to be installed, after which we will run one mile of low voltage conductors.”

Following the recent upgrade of GPL’s Network in Dagg Point, Agatash from 4160kV to 13.8kV, GPL’s F3 feeder was strung along the community, making it easier for the community to now access electricity.

During the process of modifying the network; conductors were upgraded, defective structures replaced and three feeders were built. This contributed significantly in the reduction of line losses, fewer emergencies and shorter power outages.  All of which have contributed to the township experiencing a reliable supply of electricity.

Meanwhile, GPL is also conducting other works in the region, including a street lighting project in collaboration with the Bartica Town Council.

This project will see the One to Five Miles communities outfitted with Light-Emitting Diodes (LED) lights. Abrams explained that GPL allocated 75 eleven meters poles for the project and 24 are already planted.

“The Four Mile street lighting project recently started. We are presently performing a pole planting exercise, upon completion; the conductors and the remaining line hardware will be connected to the transformers. It is important to note that all street lighting will be controlled by photocells, which embraces our electricity conservation efforts” Abrams related.

Mr. Abrams thanked the CEO Mr. Albert Gordon, Regional Manager Mr. Omesh Yogashur and team members for their leadership which allowed for the execution of several projects within the Region possible.

In 2020, GPL will be pursuing a number of developmental and expansion plans in each of its served areas, which once implemented, will see the systems operating throughout the year with little chance of outages and more people being connected to the national grid.